The Final Fight for Freedom: How to Save Our Country from Chaos and War (Hardcover) 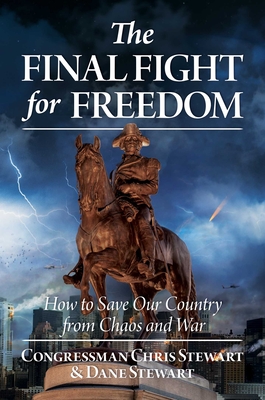 The Final Fight for Freedom: How to Save Our Country from Chaos and War (Hardcover)

Truth is being destroyed, free speech criminalized, the dollar fast becoming worthless. Ideologues at the helm of Big Tech, Big Media, and Big Business are set on the destruction of capitalism and democracy. Powerful federal agencies are no longer protectors of the people, but their primary adversary.

Not since the Civil War has our nation been so divided, bringing us to the edge of national suicide. And our enemies—China being chief among them—see our weakness. If we falter, they will act.

Not since World War II have we faced an adversary so determined to achieve global dominance. At this moment, they are perfecting an arsenal of weapons to use against us: Quantum computing. Artificial intelligence. Hypersonic missiles. Bio-warfare. These are threats we must defeat. But before we are able to do that, we must protect ourselves from the enemy within.

Many of our forefathers had to fight a Great War to save their freedom. It falls upon this generation to fight two. But we must not lose hope. There is a way to save our nation.
Chris Stewart is a multiple New York Times bestselling and national award-winning author. He is a world-record-setting former Air Force pilot who now serves as a member of Congress on both the House Permanent Select Committee on Intelligence and the Appropriations Committee. He and his wife, Evie, are the parents of six children.

After twelve years of formal education in science and medicine, Dane Stewart is now a surgeon who currently practices in the field of ophthalmology. He is married with four children and lives in Colorado.
"A chilling warning of where America could be headed if we do not change course. In the best tradition of Winston Churchill writing about the dire threats facing England in the 1930s, the Stewarts lay out with sobering clarity why America must prevail in the technology race with China and Russia. Unlike those who merely shine a light on our problems, the Stewarts offer solutions for our nation at this critical time. Everyone interested in America's national security should read this book."
— Robert C. O’Brien, Former Trump National Security Advisor Ambassador (ret.)

"Vividly portrays the great arch of freedom at the brink of peril. The intentional abuse by big tech/big media for political gain has shaken our frontier. Through courageous American tales juxtapositioned against real world costs of a bankrupt media and corrupt government agencies, we are starkly shown why the cost of freedom is so high, and why the final fight can and will be won. America is ready to be America again, we need only be brave enough to follow this riveting journey this book takes us one."
— Kash Patel, Former Deputy Assistant to the President for Counterterrorism; Former Principal Deputy to the Acting DNI; Former Chief of Staff for the Department of Defense