Everything Reminds Me of Something: Advice, Answers...but No Apologies (Hardcover) 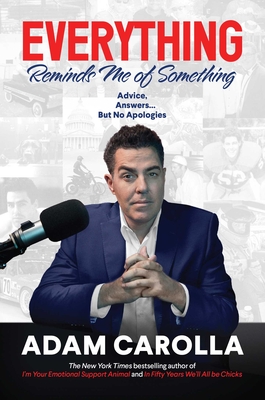 As seen on Hannity!

The bestselling comedian returns to respond and rant on real questions about life and love, careers and cars, and everything else from fans and famous friends.

Ever wonder what you would say or do if you didn’t give a f**k? Adam Carolla can tell you. In his sixth book, the comedian, podcaster, and provocateur does what he does best—doles out advice and opinions with utter disregard for our politically correct, self-righteous, virtue signaling, woke times.

Thanks to decades of hosting MTV and radio’s Loveline, his Guinness World Record–breaking podcast and touring the stand-up circuit, no one in comedy is as gifted at thinking on their feet. Taking actual questions from his fans—and even some celebrity friends, including Ray Romano, Maria Menounos, and Judd Apatow—Adam dishes out hilarious rants, unpredictable tangents, brilliant inventions, sage advice, and controversial opinions in a way only a self-proclaimed asshole can.

Adam Carolla is the author of the national bestselling I’m Your Emotional Support Animal, the New York Times bestsellers In Fifty Years We'll All Be Chicks, Not Taco Bell Material, President Me, and Daddy Stop Talking!, as well as a radio and television host, comedian, and actor. Carolla is well known as the cohost of the syndicated radio and MTV show Loveline, the cocreator and star of The Man Show and Crank Yankers, and a contestant on Dancing with the Stars and Celebrity Apprentice. He currently hosts The Adam Carolla Show, which is the Guinness World Record holder for “Most Downloaded Podcast” and is available on iTunes and AdamCarolla.com.