The Harvest of War: Marathon, Thermopylae, and Salamis: The Epic Battles that Saved Democracy (Hardcover) 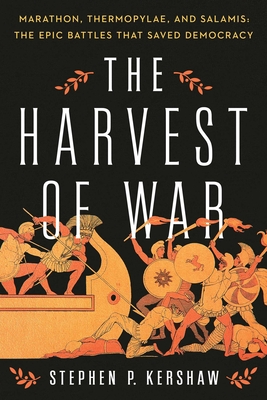 The Harvest of War: Marathon, Thermopylae, and Salamis: The Epic Battles that Saved Democracy (Hardcover)


Usually Ships in 1-5 Days
The year 2022 marks 2,500 years since Athens, the birthplace of democracy, fought off the mighty Persian Empire. This is the story of the three epic battles—Marathon, Thermopylae and Salamis—that saved democracy, forever altering the history of Europe and the West.

In 2022 it will be 2,500 years since the final defeat of the invasion of Greece by Xerxes, the Persian king. This astonishing clash between East and West still has resonances in modern history—and has left us with tales of heroic resistance in the face of seemingly hopeless odds. The Harvest of War makes use of recent archaeological and geological discoveries in this thrilling and timely retelling of the story, originally told by Herodotus, the Father of History.

In 499 BC, when the rich, sophisticated Greek communities of Ionia on the western coast of modern Turkey rebel from their Persian overlord Darius I, Athens sends ships to help them. Darius crushes the Greeks in a huge sea battle near Miletus and then invades Greece. Standing alone against the powerful Persian army, the soldiers of Athens' newly democratic state—a system which they have invented—unexpectedly repel Darius's forces on the planes of Marathon.

After their victory, the Athenians strike a rich vein of silver in their state-owned mining district, and decide to spend the windfall on building a fleet of state-of-the-art warships.

Persia wants revenge. The next Persian king, Xerxes, assembles a vast multinational force, constructs a bridge of boats across the Hellespont, digs a canal through the Mount Athos peninsula, and bears down on Greece. Trusting in their "wooden walls," the Athenians station their ships at Artemisium, where they and the weather prevent the Persians landing forces in the rear of the land forces under the Spartan King Leonidas at the nearby pass of Thermopylae. Xerxes's assault is a disastrous failure, until a traitor shows him a mountain track that leads behind the Greeks. Leonidas dismisses the Greek troops, but remains in the pass with his 300 Spartan warriors where they are overwhelmed in an heroic last stand.

Athens is sacked by the Persians. Democracy is hanging by a thread. But the Athenians convince the Greek allies to fight on in the narrow waters by the island of Salamis. Despite the heroism of the Persian female commander Artemisia, the Persian fleet is destroyed.

The Harvest of War concludes by exploring the ideas that the decisive battles of Marathon, Thermopylae, and Salamis mark the beginnings of Western civilization itself—and that Greece became the bulwark of the West—representing the values of peace, freedom, and democracy in a region historically ravaged by instability and war.
Dr. Stephen P. Kershaw has spent the majority of his career in the world of the ancient Greeks, both intellectually and physically. He has been a Classics tutor for twenty-five years and currently teaches at Oxford University. Kershaw also runs the European Studies Classical Tour for Rhodes College and the University of the South. He has written several histories, including The Enemies of Rome and The Search for Atlantis. Dr. Kershaw lives in England.
"Kershaw’s vivid account gives a sense of what Aeschylus and his fellow Greeks had to be so proud of."
— The New Criterion

"A riveting and heroic story, told with tremendous verve and splashes of colour, and still grimly relevant in today’s world of tyrants and despots, empire-builders and doughty freedom-fighters."
— Daily Mail

"Oxford University classics scholar Kershaw (The Enemies of Rome) explores in this detailed and wide-ranging history the immediate and long-term impacts of the Persian Wars in ancient Greece. This is a rich and accessible study of a pivotal turning point in world history."
— Publishers Weekly

“Ancient Rome faced many threats from outsiders, so-called barbarians. Relying upon a combination of sources—literature, mythology, and history—Kershaw painstakingly chronicles them all in this often-grisly account of an empire under siege.”
— Booklist

“An interesting take on Roman history focused on the peoples that resisted its growth and eventually brought about its destruction.”
— Kirkus Reviews