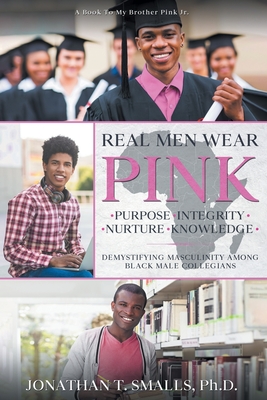 The genesis of Real Men Wear PINK evolved at the end of a five-year estrangement from my brother Pink McCaskell Jr. After serving time at Mason County Jail in Michigan, Pink returned home with hopes of leaving his past behind to embark on uncharted territory. Pink's journey would begin with unconventional access to college. Ironically, two brothers'- "the thug" and "the scholar- paths crossed on a college campus. Though I was the scholar, he became my professor and unveiled the mysteries of machismo behavior in the context of racial, gender, and economic oppression. Machismo is the professor of Black men. He proliferates the luxuries of sex, aggression, power, deviance, and aloofness. Real Men Wear PINK uses the creativity of storytelling to unveil how machismo manifests in four Black male collegians from diverse backgrounds- Avery Johnson, Jaleen Gonzalez, Julius Simba-Simbi, and Pink McCaskell Jr. At the crossroads, each is challenged with accepting their past and forging a promising future. The book uniquely captures the struggles of being Black, male, and a collegian by using parables rooted in theory and practice to reimagine Black males' purpose, integrity, nurture, and knowledge- PINK.