The Widow Nash: A Novel (Paperback) 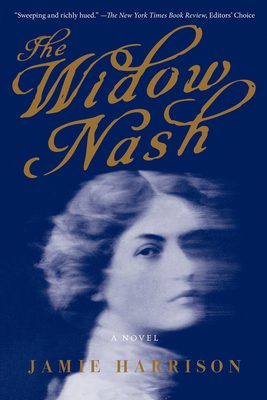 "What keeps you reading is not just the quality of the writing, which is just absolutely wonderful, but also to find out: Is [Dulcy] going to [remake herself]? Can this be successful? Or is she going to be found out?" ―Nancy Pearl, Morning Edition, NPR

Dulcy Remfrey has traveled the globe with her eccentric father, Walton, a wealthy entrepreneur obsessed with earthquakes and catastrophe, searching to cure his long battle with syphilis through any crackpot means necessary. Their deep connection is tested, however, when Walton returns from an African expedition without any of the proceeds from the sale of his gold mine. It seems he's lost his mind along with the great sum of money, his health declining rapidly. Her father's business partner (and her ex–fiancé) insists Dulcy come to Seattle to decipher her father's cryptic notebooks—a dozen in all, wrapped in brightly colored silk—which may hold clues to the missing funds. Yet when her father dies before they can locate the money, Dulcy falls under suspicion. Petrified of being forced to spend the rest of her life with her ex–love, Dulcy decides to disappear from the train bringing her father's body home.

Is it possible to disappear from your old life and create another? Dulcy travels the West reading stories about her presumed death and settles into a small Montana town where she is reborn as Mrs. Nash, a wealthy young widow with no burden of family. But her old life won't let go so easily, and soon her ex–fiancé is on her trail, threatening the new life she is so eager to create.

The Widow Nash is a riveting narrative, filled with a colorful cast of characters, rich historical details, and epic set pieces. Europe in summer. New York in fall. Africa in winter. The lively, unforgettable town of Livingston, Montana. And in Dulcy, Jamie Harrison has created an indelible heroine sure to capture the hearts of readers everywhere.

Jamie Harrison, who has lived in Montana with her family for more than thirty years, has worked as a caterer, a gardener, and an editor, and is the author of The Center of Everything, The Widow Nash, and the four Jules Clement/Blue Deer mysteries: The Edge of the Crazies, Going Local, An Unfortunate Prairie Occurrence, and Blue Deer Thaw. She was awarded the Mountains & Plains Independent Booksellers Association Reading the West Book Award for The Widow Nash, and was a finalist for the High Plains Book Award.

"This novel from the daughter of Jim Harrison features a character set loose to wander the American West at the turn of the 20th century, a woman whose early experiences seem drawn from the worldly peregrinations of the era of Henry James. Sweeping and richly hued . . . Harrison has rendered her imagined world anachronistically, but Henry James might still have approved.” —The New York Times Book Review

“What keeps you reading is not just the quality of the writing, which is just absolutely wonderful, but also to find out: Is [Dulcy] going to [remake herself]? Can this be successful? Or is she going to be found out?” —Nancy Pearl, Morning Edition, NPR

“Jamie Harrison . . . shares a number of traits with her father [Jim Harrison]—superior storytelling skills, love of landscape, wry humor, and a knack for gorgeous writing about food. The Widow Nash reverberates with a daughter’s affection for a larger–than–life father, surely a tribute of sorts to a real–life relationship.” —Newsday

“A languid yet intriguing read . . . Harrison has debunked the idea that women in the early 1900s had no control over their lives and only looked to men for direction and happiness. There is a love story but it is not standard, and Dulcy certainly isn't dependent upon a man to rescue her. All of the characters have the kind of quirks that feel natural to the reader. No one character is perfect, and Harrison shines at creating a cast of friends and associates that I would happily spend an evening drinking and chatting with . . . Harrison is artful in her writing and most of the events influence the plot in important ways . . . The Widow Nash delivers an excellent story. Harrison has crafted an atmospheric historical novel with original characters for readers to enjoy. Her writing is sophisticated and quick witted, ideal for a pleasurable summer read.” —The Missoulian

“Richly descriptive, The Widow Nash is the luminous story of a woman suspended between two worlds, one promising, the other catastrophic.” —BookPage

“Harrison . . . writes atmospheric historical fiction featuring both drama and bizarrely entertaining humor. There are Whartonesque touches in the demarcations of society . . . A subtler comedy of errors among a quirky cast of characters.” —Booklist

“Debut novelist Harrison paints a lovely and memorable portrait of a desperate woman's flight to a new life . . . Harrison's lead is a strong and clever woman who is easy to admire, while the rest of the heroes, villains, and ambiguous sorts are as vividly drawn as the raw and terrible scenery of Montana. Readers will treasure Harrison's rich characterization and sharp turns of phrase.” —Publishers Weekly (starred and boxed review)

“When Walton dies before anyone can figure out what's happened to Victor's money, Dulcy decides that her only option is to disappear. Thus, Dulcy Remfrey turns herself into the young widow Mrs. Nash. This baroque setup is nicely balanced by Harrison's prose; the narrative voice here is restrained, with just a hint of quiet irony. And there's the fact that, as fantastical as the scenario might seem, Walton Remfrey is an entirely believable Gilded Age figure . . . Thoughtful, richly written historical fiction” —Kirkus Reviews

“With The Widow Nash, Jamie Harrison breathes fresh life into a fascinating period of American history. Indeed, the past has not passed. An adventurous, ambitious, inventive novel by a writer to relish.” —Colum McCann, winner of the National Book Award for Let The Great World Spin

“This deliciously ambitious novel delivers one memorable character after another. None is more magnetic than the 'Widow Nash' herself, a fabulous heroine and irresistible travel companion. Jamie Harrison is a clever, gifted writer, and this shining book is flat–out terrific.” —Carl Hiaasen, New York Times bestselling author of Razor Girl

“With Technicolor, vibrant prose, Jamie Harrison's novel The Widow Nash re–invents the Western from a feminist perspective; from the first page, the fierce Dulcy brings the reader into her unforgettable world. A novel as wildly original and memorable as the West itself.” —Karen E. Bender, author of Refund, a Finalist for the National Book Award