Fitzgerald Treasury - The Great Gatsby, This Side of Paradise, The Beautiful and Damned (Hardcover) 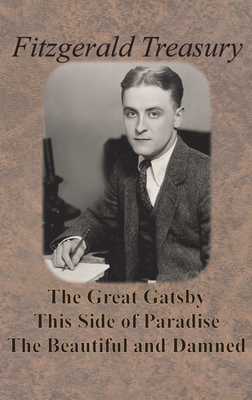 Complete editions of The Great Gatsby, This Side of Paradise, and The Beautiful and Damned by F. Scott Fitzgerald. His oozing verse and indulgent styling are fully captured here.

His three early novels, written in and describing the post World War period of 1920's America, are haunting classics that stays with the reader.

From The Great Gatsby (1925): "Only Gatsby, the man who gives his name to this book, was exempt from my reaction-Gatsby, who represented everything for which I have an unaffected scorn. If personality is an unbroken series of successful gestures, then there was something gorgeous about him, some heightened sensitivity to the promises of life..."

From This Side of Paradise (1920): "Amory Blaine inherited from his mother every trait, except the stray inexpressible few, that made him worth while."

From The Beautiful and Damned (1922): "As you first see him he wonders frequently whether he is not without honor and slightly mad, a shameful and obscene thinness glistening on the surface of the world like oil on a clean pond, these occasions being varied, of course, with those in which he thinks himself rather an exceptional young man, thoroughly sophisticated, well adjusted to his environment, and somewhat more significant than any one else he knows."

No student of thought should be without these historic books. This edition is provided in a slim volume with full text at an affordable price.