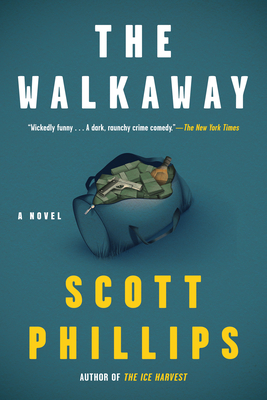 Noir master Scott Phillips's The Walkaway explores the far-reaching consequences of the deception and violence of its predecessor, The Ice Harvest.

Summer 1989: Gunther Fahnstiel, once a tough cop who wasn’t averse to taking a little side money from a certain madam, has just escaped the dementia ward of his Wichita nursing home. He’s not exactly sure where he wants to go, but wherever it is, it has to do with the bag full of cash belonging to the man he accidentally backed over with his RV in 1979. During his search, Gunther begins to relive the violent fallout of that madam’s sex lottery forty years ago. As Gunther’s memories unravel,
his past and present will collide in a devastating reckoning. This dark comedy, at once prequel and sequel to Phillips’s award-winning debut The Ice Harvest, proves that no walkaway can escape unscathed.

Scott Phillips is a screenwriter, photographer and the author of eight novels and a short story collection. His bestselling debut novel, The Ice Harvest, was a New York Times Notable Book and was adapted as a major motion picture starring John Cusack and Billy Bob Thornton. He is the winner of the California Book Award, as well as being a finalist for the Edgar Award, the Hammett Prize and the CWA Gold Dagger Award. Scott was born and raised in Wichita, Kansas and lived for many years in France. He now lives with his wife and daughter in St. Louis, Missouri.

Praise for The Walkaway

"Every month much more great crime fiction is published than there is room to mention. One that got away was Scott Phillips's debut, The Ice Harvest . . . His follow-up, The Walkaway is more ambitious and equally memorable . . . It's a sort of sequel to The Ice Harvest, but it: stands nicely all by its witty, cheerfully lowlife self."
—The Seattle Times

"What Phillips has created here is one of those rare novels that, in terms of its subject matter and tone, looks backward with respect to the classics of the genre from which it arose and, with its intricate narrative structure and multilayered plot, simultaneously moves the genre boldly forward by approaching the same old ground in startlingly new and ingenious ways."
—Master News

“[Phillips’s] work recreates the mood of a working-class, unhip, industrious, dangerous and now-lost America . . . but his interest in the American dream's underbelly of failure and disappointment is real.”
–The Guardian

"Phillips is a stylish, laconic writer and The Walkaway, in pulling off his merging of two time scales, never falters for a moment. Terrific."
—The Observer

"A mystery within a mystery, set in both the past and the present. This is a hard trick to pull off, but Phillips does it extremely well . . . This is the second novel for Phillips; I hope there are many more, with its unusual plot and entertaining story."
—Times Record News (Wichita)

"When it comes to present-day practitioners of noir, Phillips is one of the best.”
—Library Journal

"Phillips turns the image of Kansas heartland virtue upside down in his latest noir thriller set in Wichita's underbelly . . . A story full of blood and bad attitude."
—Publishers Weekly