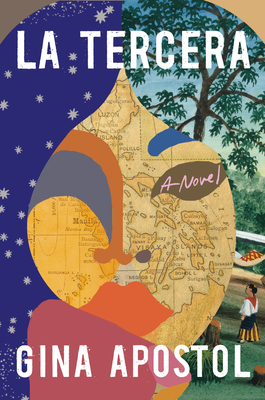 In her first novel since Insurrecto, Gina Apostol assembles a vision of Philippine history from the 19th century to present day in the fragmented story of the Delgados, a family surviving across generations of colonization, catastrophe, and war.

Rosario Delgado, a Filipina novelist in New York City, learns of her mother’s death in the Philippines. Instead of rushing home, she puts off her return by embarking on an investigation into her family’s history and her mother’s supposed inheritance, a place called La Tercera, which may or may not exist. Rosario catalogs generations of family bequests and detritus: maps of uncertain purpose, rusted chicken coops, a secret journal, the words to songs sung at the family home during visits from Imelda Marcos.

Each life Rosario explores opens onto a multitude of other lives and raises a multitude of questions. But as the search for La Tercera becomes increasingly labyrinthine, Rosario’s mother and the entire Delgado family emerge in all their dizzying complexity: traitors and heroes, reactionaries and revolutionaries. Meanwhile, another narrative takes shape—of  the country’s erased history of exploitation and slaughter at the hands of American occupying forces.

La Tercera is Gina Apostol’s most ambitious, personal, and encompassing novel—a story about the impossibility of capturing the truth of the past, and the terrible cost to a family, or a country, that fails to try.

Gina Apostol is the author of the novels Insurrecto, Gun Dealers’ Daughter, Bibliolepsy, and The Revolution According to Raymundo Mata. She is the winner of two Philippine National Book Awards, the PEN/Open Award, and the Rome Prize. Her short stories have appeared in various anthologies and journals including The Gettysburg Review and the Penguin anthology of Asian American fiction, Charlie Chan Is Dead, Volume 2.

“A bravura performance in which war becomes farce, history becomes burlesque . . . Apostol is a magician with language (think Borges, think Nabokov) who can swing from slang and mockery to the stodgy argot of critical theory. She puns with gusto, potently and unabashedly, until one begins reading double meanings, allusions and ulterior motives into everything.”
—The New York Times

“Gina Apostol uses an array of literary and cinematic techniques: memoirs, jump cuts, close-ups, and reveries to set a story in Duterte’s Philippines that shows us that though victors often write histories, survivors and artists can revise them.”
—NPR’s Weekend Edition

“Wickedly funny . . . Ferocious in its political indignation . . . Pick one of the many figures offered by the novel itself: a palimpsest, a translation, a stereoscope, an abaca weave. Insurrecto is all of these things—a polyphonic work that challenges the reader to keep up with its plotting and to think with or against or through its complex moral reckonings.”
—The Boston Globe

“Dazzling . . . A tender character study erupting with blazing insights on the ethics of storytelling.”
—Entertainment Weekly