Victory Stolen: The Perspectives of a Helicopter Pilot on the Tet Offensive and Its Aftermath (Paperback) 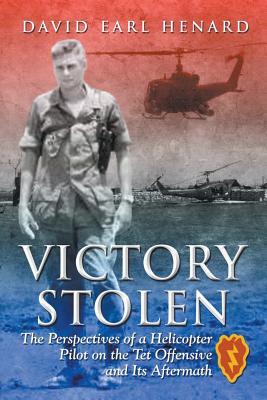 David Earl Henard received his commission as a second lieutenant signal officer in the US Army upon his graduation from the University of Missouri of Rolla with a BS in electrical engineering in August 1965. His service as a helicopter pilot with the 25th Aviation Battalion, 25th Infantry Division in Vietnam began in July 1967 and ended in June 1968. After a nine-month assignment near Warrington, England, as the aviation detachment commander and battalion signal officer, when he married Gail, he began civilian life as a graduate assistant and student at the University of Illinois. His work there led him into computer programming and systems development, leading to an assignment as the assistant director for systems development at the University of Illinois, Urbana. He received a Master's Degree in Industrial Engineering in June, 1971. He was hired as the computer services director at Eastern Illinois University in Charleston, Illinois, beginning in 1980. He retired from EIU as the associate vice president for information technology services in 2000 to join his wife Gail as a part-time missionary and as a stock trader. The two have served in various humanitarian jobs in Scotland; Juarez, Mexico; and Central Asia.

This is his story about the Tet Offensive, where the 25th Infantry Division was heavily involved in the defense of Saigon. He includes some Vietnam history leading to the Tet Offensive and some researched insights on the press coverage that heavily influenced the ultimate outcome.