A Woman's Place Is in the Brewhouse: A Forgotten History of Alewives, Brewsters, Witches, and CEOs (Paperback) 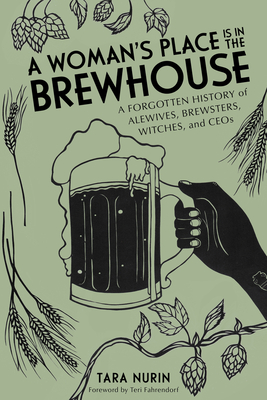 Dismiss the stereotype of the bearded brewer.

It’s women, not men, who’ve brewed beer throughout most of human history. Their role as family and village brewer lasted for hundreds of thousands of years—through the earliest days of Mesopotamian civilization, the reign of Cleopatra, the witch trials of early modern Europe, and the settling of colonial America. A Woman’s Place Is in the Brewhouse celebrates the contributions and influence of female brewers and explores the forces that have erased them from the brewing world.

It’s a history that’s simultaneously inspiring and demeaning. Wherever and whenever the cottage brewing industry has grown profitable, politics, religion, and capitalism have grown greedy. On a macro scale, men have repeatedly seized control and forced women out of the business. Other times, women have simply lost the minimal independence, respect, and economic power brewing brought them.

But there are more breweries now than at any time in American history and today women serve as founder, CEO, or head brewer at more than one thousand of them.

As women continue to work hard for equal treatment and recognition in the industry, author Tara Nurin shows readers that women have been—and are once again becoming—relevant in the brewing world.

Tara Nurin is the beer and spirits contributor to Forbes and an adjunct Beer 101 instructor at Wilmington University. The former major-market TV news reporter has been the Libations columnist for New Jersey Monthly, the women-in-beer columnist for Ale Street News, and the cohost of the What’s on Tap weekly beer TV show. Her work has been published in more than fifty newspapers, magazines, and digital platforms such as Food + Wine, USA Today, and Wine Enthusiast. She is certified by the Beer Judge Certification Program and serves as a frequent expert and host in the media and in educational programming. She lives outside of Philadelphia, PA. Teri Fahrendorf is an American brewer and founder of the Pink Boots Society, an organization that supports women in the brewing industry. She is notable for being one of the first women in the craft brewing industry and her brews have been widely awarded from organizations such as Great American Beer Festival and the Brewer's Association.

“This book is the key to the queendom. If you like women, beer, and history, as I do, then find a comfortable chair and pour yourself a tall frothy glass of fermented barley juice. The adventure you’re about to embark on will open your eyes to the forgotten history of women and their role in the greatest civilizing event in history: beer." —Teri Fahrendorf,Pink Boots Society founder, from her foreword


"You may or may not have heard of Ninkasi, the Sumerian goddess of beer. You must become familiar with Tara Nurin, the goddess of contemporary beer writing. Tara has been an award-winning writer of beer and the business of beer for Forbes for years. She knows how to grab your attention with fascinating stories in short pieces. With the unlimited space of a book, her story becomes interesting, compelling, and comprehensive." —Pete Slosberg, founder of Pete's Wicked Ales and author of Beer for Pete's Sake


"Tara Nurin has written one of the more novel and, indeed, necessary beer books of the past few decades. It was an eye-opener to learn about a segment of the brewing past that's often overlooked or simply outright ignored. I highly recommend this read to anyone serious, or even just curious, about beer." —Tom Acitelli, author of The Audacity of Hops: The History of America's Craft Beer Revolution and PILSNER: How the Beer of Kings Changed the World


“A timely, fascinating, and incisive reminder of what has always been true but too often ignored: women are every bit as core to the beer industry as their male counterparts. Tara Nurin’s deeply reported and lovingly told tale underscores that a woman’s place isn’t only in the brewhouse but across every inch of the beer industry.” —Josh Noel, author of Barrel-Aged Stout and Selling Out


“Tara Nurin shines a much-needed spotlight on the ‘herstory’ of beer during a time of reckoning and self-reflection in our industry. From Mesopotamian women with cauldrons to modern-day brewery owners like myself, Tara effortlessly captures the evolution and importance of women in beer over thousands of years on the pages of this captivating read!” —Natalie Cilurzo, co-owner and president, Russian River Brewing Company

“A very insightful book highlighting the relevance of women in the brewing industry in Africa and around the world.” —Peace Onwuchekwa, brewer, Bature Brewery, Nigeria