Boys Enter the House: The Victims of John Wayne Gacy and the Lives They Left Behind (Paperback) 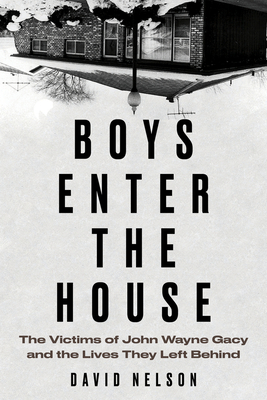 As investigators brought out the bagged remains of several dozen young men from a small Chicago ranch home and paraded them in front of a crowd of TV reporters and spectators, attention quickly turned to the owner of the house. John Gacy was an upstanding citizen, active in local politics and charities, famous for his themed parties and appearances as Pogo the Clown. But in the winter of 1978–79, he became known as one of many so-called “sex murderers” who had begun gaining notoriety in the random brutality of the 1970s.

As public interest grew rapidly, victims became footnotes and statistics, lives lost not just to violence, but to history. Through the testimony of siblings, parents, friends, lovers, and other witnesses close to the case, Boys Enter the House retraces the footsteps of these victims as they make their way to the doorstep of the Gacy house itself. Amid the ragged streets of the Uptown neighborhood, Samuel Stapleton and Randy Reffett play out a boyhood rivalry across gangs and girls that turns into a long-lasting friendship. Frank “Dale” Landingin and Billy Carroll attempt to break free of turbulent family lives, but find themselves navigating the gay underworld to get ahead. On the eve of starting their own lives, Gregory Godzik and Johnny Szyc juggle jobs and relationships as their paths gradually lead them to the home at 8213 Summerdale Avenue.

United by one man’s act of depravity, these victims will step forward to share boyish dreams of love and sex, family tragedies of abuse and addiction, and adolescent journeys through the neighborhoods of Chicago and the vibrant decade of the 1970s.

David Nelson is the author of several short stories published in the Rappahannock Review, TishmanReview, and Another Chicago Magazine. His work has been nominated for a Pushcart Prize and received honorable mentions from Glimmer Train. His coverage of ongoing war crime trials and the DNA identification process for victims of the Balkans conflicts was published by the Institute for War and Peace Reporting (IWPR). A graduate of Northwestern University’s Medill School of Journalism, Nelson has been researching the John Wayne Gacy case since 2012, when he published an update on the case’s developments for Medill. He lives in Chicago.

"Sometimes in the numerous writings and TV shows on the story of John Wayne Gacy, and in fact in projects on many serial killers, it’s the startling and disturbing number of victims that stands out. But too often they remain not much more than that—numbers. Not so in Boys Enter the House. Here is a work that emphasizes the full view of the lives of those young people that Gacy took. Their worlds that they were removed from too soon. It is essentially the Gacy story in reverse. Victims first." —Jeff Coen, author of Murder in Canaryville and Family Secrets


"A fresh—and needed—approach to one of Chicago’s most sensational crimes. Through sensitive interviews with people close to John Gacy’s young victims, we hear them laugh, understand their ambitions, and sense the challenges they faced, coming of age on streets tingling with money and sex—and shadowed by unspeakable risk. Despite its inherent horror, this is a profoundly humane book." —Mara Leveritt, investigative reporter and author of Devil’s Knot


"Boys Enter the House is an incredibly researched yet page-turning narrative and an essential read: anyone fascinated with this case knows of the many murdered boys, but David B. Nelson expands their lives to a familiarity I've never before felt. The tragedy typically associated with the case is that Gacy's victims were so young that they had their whole lives ahead of them, but this book illustrates that they are as people, boys who may have had much promise, but had already survived and endured a hell of a lot. In an even more novel approach, Nelson also illuminates the lives of the indirect victims, the cascading fallout on the families, friends, and even professionals whose worlds were forever changed.  David B. Nelson's level of attention, detail, and respect toward the victims of criminals is the gold standard for every true crime writer." —Mary Kay McBrayer, author of America’s First Female Serial Killer

“Both tender and heartbreaking, this book is a bit of a miracle. Not only are the lives of John Wayne Gacy's victims brought back to life on the page, but so are the lives of their families who were left behind. Nelson artfully brings the full weight of his craft to these complex stories of before and after.” —Liza Rodman, coauthor of The Babysitter: My Summers with a Serial Killer

“David Nelson shines a light on lives often shaded by the headlines. Boys Enter the House explores the real-life stories behind the victims that get lost in the wake that is John Wayne Gacy. Well written and devastating, this book shows the world that these boys were much more than just the victim of a serial killer.” —Gregg Olsen, New York Times bestselling author of If You Tell and Water's Edge


"Heartrending and poignant, this is an excellent sociological examination of life in Chicago’s Uptown neighborhood in the 1970s." — Library Journal

"Nelson succeeds in giving Gacy’s victims a voice. This is a must for true crime fans." — Publishers Weekly


"David B. Nelson's level of attention, detail, and respect toward the victims of criminals is the gold standard for every true crime writer." —Mary, Goodreads