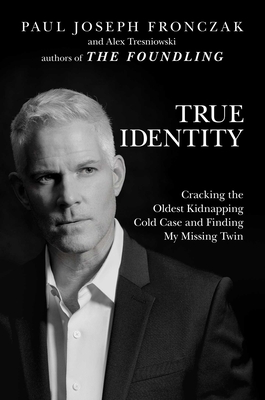 A man desperate to know his true identity struggles to solve the infamous kidnapping that nearly destroyed his family—and find his twin sister, who has been missing for more than fifty years.

When he was ten years old, Paul Fronczak was snooping around for Christmas presents in a crawl space in his family’s Chicago home. There, he found hundreds of old newspaper clippings about the kidnapping of a one-day-old infant in a hospital in 1964. He also learned that, two years later, the boy was found and returned to his family—and that the boy was him.

Nearly fifty years later, Paul, acting on long-held suspicions, took a DNA test that proved he was not the kidnapped boy. In an instant, he found himself at the center of two half-century-old mysteries—who was he, and where was the real Paul?

True Identity is about three separate major investigations—the hunt for the real Paul Fronczak; the search for the author’s missing twin sister Jill; and finally, the investigation into his true identity, his heart and soul and the demons inside him—inherited and created—that still need to be confronted.

Paul Fronczak is a military veteran and former actor who now works for a non-profit organization devoted to saving lives. Nine years ago, Paul took a DNA test that disproved the story he'd been told about his identity—that he was “Baby Fronczak,” the infant who'd been kidnapped from a Chicago hospital in an infamous 1964 crime. In an instant, he became a man without a name, birthday, or medical history—an “unidentified living person,” in official terminology. Paul has spent the last eight years searching for answers—and looking for the real Paul Fronczak. An avid bass guitarist and Rush fan, Paul now lives in Las Vegas and has a daughter he calls “the greatest kid in the world.”