Defenders of the West: The Christian Heroes Who Stood Against Islam (Hardcover) 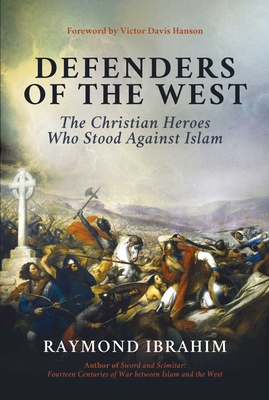 A riveting account of the lives and epic battles of eight Western defenders against violent Islamic jihad that sheds much-needed light on the enduring conflict with radical Islam.

In Defenders of the West, the author of Sword and Scimitar follows up with vivid and dramatic profiles of eight extraordinary warriors—some saints, some sinners—who defended the Christian West against Islamic invasions. Discover the real Count Dracula, Spain’s El Cid, England’s Richard Lionheart, and many other historical figures, whose true and original claim to fame revolved around their defiant stance against jihadist aggression. With sixteen full color pages of photos and illustrations, Defenders of the West is an instructive and inspiring read. Whereas Sword and Scimitar revolved around decisive battles, Defenders of the West revolves around decisive men.

Raymond Ibrahim, an expert in Islamic history and doctrine, is the author of Sword and Scimitar: Fourteen Centuries of War between Islam and the West (2018); Crucified Again: Exposing Islam’s New War on Christians (2013); and The Al Qaeda Reader (2007). He has appeared on C-SPAN, Al-Jazeera, CNN, NPR, and PBS, and been published by the New York Times Syndicate, Los Angeles Times, Washington Post, Financial Times, Weekly Standard, Chronicle of Higher Education, and Jane’s Islamic Affairs Analyst. Formerly an Arabic linguist at the Library of Congress, Ibrahim has guest lectured at many universities, including the U.S. Army War College, briefed governmental agencies such as U.S. Strategic Command, and testified before Congress. He has been a visiting fellow/scholar at a variety of Institutes—from the Hoover Institution to the National Intelligence University—and is currently a Shillman Fellow at the David Horowitz Freedom Center, a Judith Friedman Rosen Fellow at the Middle East Forum, and a Senior Fellow at the Gatestone Institute.