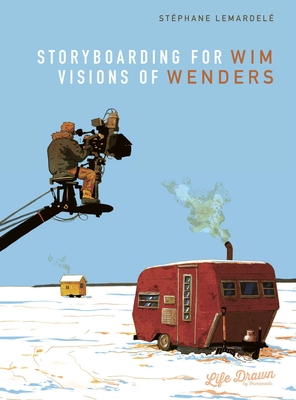 The firsthand account of a storyboard artist and his intimate experience with acclaimed filmmaker Wim Wenders.

With this book, Stéphane Lemardelé traverses uncharted territory, linking the sequential art form with the often overlooked medium of a storyboarder—the two intrinsically tied but the former seen as an end in and of itself, and the latter a means to someone else's end.

In this case, that "someone else" is legendary, cult-classic filmmaker Wim Wenders (Paris Texas, Wings of Desire), and the "end" is his 2015 film Everything Will Be Fine (starring Rachel McAdams and Charlotte Gainsbourg).

Through this graphic novel, Stéphane captures not only the formation of this film, but moments of artistic reflection from Wim himself: intimate interactions between the two where Wim ponders the trajectory of his career and evolution as an artist, and the meaning of film as a tool with which to examine our own humanity.

A collector's item intended for fans of cinema and memoir, featuring actual storyboards from the production.

Born in France in May 1968, Stéphane Lemardelé studied at the School of Fine Arts in Cherbourg before emigrating to Quebec in 1995.

As a film storyboarder, he has worked on feature films such as Brick Mansion by C. Delamarre (Luc Besson productions) and Everything Will Be Fine by Wim Wenders. He has collaborated in the organization of multiple festivals: Les rendez-vous du cinéma québécois, Festival du nouveau cinéma de Montréal or Off-Courts de Trouville in France. In his region, he develops multiple collective artistic projects involving citizens and contributing to create social cohesion (Le Labohem, À auteur d'enfant, RetroLabo).

He has also published several travelogues at Ouest France - Edilarge.

After a first solo foray with Le Nouveau monde paysan in Quebec and then the storyboard of Le Château de mon père by Maïté Labat and Jean-Baptiste Véber, he has returned to his solo comics work with Le Storyboard de Wim Wenders, which will be published in 2022.