Camping And Woodcraft - Combined Two Volumes In One - The Expanded 1921 Version (Legacy Edition): The Deluxe Two-Book Masterpiece On Outdoors Living A (Paperback) 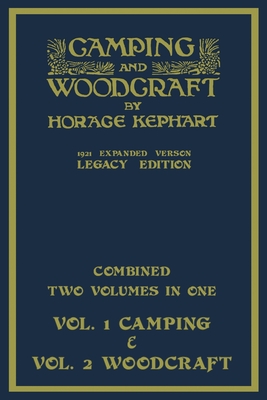 The Deluxe Masterpiece on Outdoors Living, Bushcraft, and Wilderness Travel

This deluxe, unabridged reprint Legacy Edition of Horace Kephart's 1916-1917 Camping And Woodcraft as a combined two volumes in one version has served as the standard for outdoors adventure for many decades after it was published, and continues that legacy today with its timeless knowledge it contains First published in 1921 as a two-volumes-in-one version, this is a significantly expanded version of Kephart's original 1906 work (The Book of Camping and Woodcraft Original Edition). This deluxe expanded version provides hundreds of additional pages of insights, tricks, tips, and skills instruction for thriving in camp and in the wilderness.

This handbook was originally published in two separate volumes due to its size, however is published in a combined volume here in the exact way the 1921 2-in-1 version was published.

In Volume I - Camping, Kephart provides detailed instruction on camping, camp equipment, and outdoor life. This includes setting up your camping gear and outfit, tents, camp equipment, bedding, clothing, how to make your camp, camp fire making, how to dress game and fish, and many old-time recipes perfect for the camp kitchen.

In Volume II - Woodcraft, Kephart provides instruction and advice on travel in the outdoors, nature lore, navigation skills, conquering the biting and stinging pests of the woods, emergencies, knots, and other necessary skills.

This Doublebit Press Legacy Edition continues with this tradition by presenting the original volumes in their exact form as they were published by the now-defunct Outing Publishing Company. Enjoy dozens of vintage line-art illustrations within the book as well, especially in the sections on tents and camp equipment

Enjoy your copy of Camping And Woodcraft for its historical record of the earliest days of recreational camping. Some material, of course, is past its time. However, most of the material is timeless Perhaps you may even learn an old skill or two.

This book makes a perfect gift for camping enthusiasts, outsoorspeople, campers, hunters, bushcrafters, scouts, and historians. This book represents the rich history of the camping tradition, and belongs on the bookshelf of every outdoors enthusiast

A part of the Library of American Outdoors Classics.

This Doublebit Legacy Edition facsimile reprint of Camping And Woodcraft is professionally restored and presented from the exact original source with the highest degree of fidelity possible. Available in both paperback and hardcover, readers can enjoy this Legacy Edition for generations to come and learn from its timeless knowledge for years to come.

About the Doublebit Press Library of American Outdoors Classics

As a part of the Doublebit Press Library of American Outdoors Classics, this unabridged Legacy Edition volume is reprinted in the exact form as it was presented in the original publication. Both important and minor details have equally both been accounted for by our publishing staff, down to the cover, font, layout, and images. It is the goal of Doublebit Legacy Edition series to preserve outdoors heritage, but also be cherished as collectible pieces, worthy of collection in any outdoorsperson's library and that can be passed to future generations.