Aleister Crowley in England: The Return of the Great Beast (Hardcover) 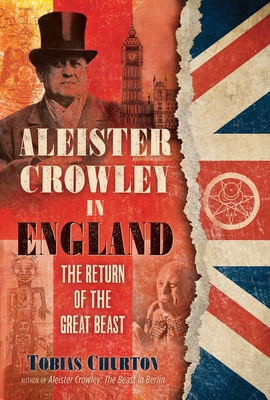 After an extraordinary life of magical workings, occult fame, and artistic pursuits around the globe, Aleister Crowley was forced to spend the last fifteen years of his life in his native England, nearly penniless. Much less examined than his early years, this final period of the Beast’s life was just as filled with sex magick, espionage, romance, transatlantic conflict, and extreme behavior.

Drawing on previously unpublished diaries and letters, Tobias Churton provides the first detailed treatment of the final years of Crowley’s life, from 1932 to 1947. He opens with Crowley’s nick-of-time escape from the Nazi takeover in Germany and his return home to England, flat broke. Churton offers extensive confirmation of Crowley’s work as a secret operative for MI5 and explores how Crowley saw World War II as the turning point for the “New Aeon.” He examines Crowley’s notorious 1934 London trial, which resulted in his bankruptcy, and shares inside stories of Crowley’s relations with Californian O.T.O. followers, including rocket-fuel specialist Jack Parsons, and his attempt to take over H. Spencer Lewis’s Rosicrucian Order. The author reveals Crowley’s sex magick relations in London and his contacts with spiritual leaders of the time, including Dion Fortune and Wicca founder Gerald Gardner. He examines Crowley’s dealings with artists such as Dylan Thomas, Alfred Hitchcock, Augustus John, Peter Warlock, and Peter Brooks and dispels the accusations that Crowley was racist, exploring his work with lifelong friend, black equality activist Nancy Cunard.

Churton also examines the development of Crowley’s later publications such as Magick without Tears as well as his articles in reaction to the Nazi Gestapo who was actively persecuting his remaining followers in Germany. Presenting an intimate and compelling study of Crowley in middle and old age, Churton shows how the Beast still wields a wand-like power to delight and astonish.

Tobias Churton is Britain’s leading scholar of Western Esotericism, a world authority on Gnosticism, Hermeticism, and Rosicrucianism. He is a filmmaker and the founding editor of the magazine Freemasonry Today. An Honorary Fellow of Exeter University, where he is faculty lecturer in Rosicrucianism and Freemasonry, he holds a master’s degree in Theology from Brasenose College, Oxford, and created the award-winning documentary series and accompanying book The Gnostics, as well as several other films on Christian doctrine, mysticism, and magical folklore. The author of many books, including Gnostic Philosophy, The Invisible History of the Rosicrucians, and Aleister Crowley: The Beast in Berlin, he lives in England.

“Aleister Crowley has found the biographer he could have wished for. By staying close to the original sources, Tobias Churton has managed to dive deeply into the emotional life of an unparalleled religious thinker who celebrated life. Aleister Crowley in England is like the man himself--profound, witty, imaginative, and joyous.”
— Frank van Lamoen, assistant curator and researcher, Stedelijk Museum, Amsterdam

“Tobias Churton’s masterful survey of the Beast’s declining years battling ill-health and poverty in England, records not only matters Magickal with the author’s usual scrupulous attention to accuracy and detail but also reveals other aspects of Crowley’s perverse personality, like the luxurious meals he prepared for guests even following bankruptcy, his priapic adventures, seemingly undiminished by chronic asthma, and more. All this is dished up with Churton’s customary eloquence and panache, a triumphant addition to the definitive multivolume biography.”
— Patrick Robertson O.B.E., Historian

“Tobias Churton gives the deluxe treatment to Aleister Crowley’s often-overlooked final years: As a life of magick, romance, controversy, and intrigue draws to a close, the Beast crystallizes his incredible experiences into his most mature works, does his part for the war effort, reinvents the Tarot, and forges relationships that will carry his legacy well beyond his lifetime. Crowley beguiles and endures to the very end.”
— Richard Kaczynski, author of Perdurabo: The Life of Aleister Crowley

“Tobias Churton’s excellent series of books exploring the different phases of Aleister Crowley’s life and work continues here, revealing much of the deeper details often overlooked in the Beast’s later years. Churton has a true gift for finding and correlating the different connections Crowley made with people who were first drawn by his reputation, only to be bewitched by his personal magnetism into staying when they had every reason to shun him.”
— Toby Chappell, author of Infernal Geometry and the Left-Hand Path

“Resettled in the UK, neither financial problems nor failing health could stop the ‘Great Beast’ from creating The Book of Thoth and a multitude of occult classics. Churton’s masterful study of these final decades of Crowley’s life is as revealing as it is entertaining.”
— Carl Abrahamsson, magico-anthropologist, filmmaker, and author of Occulture

“With delightful prose and his ever-present understanding of Aleister Crowley’s humor and humanity, Tobias Churton expertly separates the man, the myth, and the legend, revealing the clearest picture available of the world’s most famous occultist.”
— Tamra Lucid, founding member of the experimental rock band Lucid Nation and author of Making the Ord

“Aleister Crowley in England, by scholar Tobias Churton, is a very precious and fascinating work, covering the last fifteen years of the Beast in his native England. It throws considerable light on his final period, not well known and as full of crazy events as his early days. A must-have.”
— Philippe Pissier, French translator of Aleister Crowley