The Story of Gaia: The Big Breath and the Evolutionary Journey of Our Conscious Planet (Paperback) 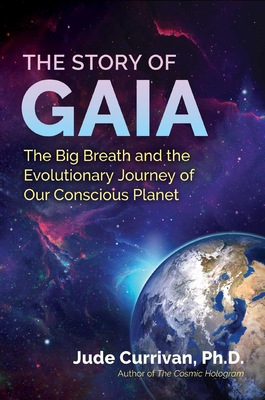 Explores how the Universe, our planet, ourselves, and everything in existence has inherent meaning and evolutionary purpose

Exploring our emergence as self-aware members of a planetary home and entire Universe that is a unified and innately sentient entity, Jude Currivan, Ph.D., shows that mind and consciousness are not what we possess but what we and the whole world fundamentally are. She reveals our Universe as “a great thought of cosmic mind,” manifesting as a cosmic hologram of meaningful in-formation that vitally, exists to evolve.

Sharing leading-edge scientific breakthroughs, and showing how they support traditional visions of Earth as a living being--Gaia, the author details the 13.8 billion-year story of our Universe and Gaia, where everything in existence has inherent meaning and evolutionary purpose. Showing how the Universe was born, not in an implicitly chaotic big bang, but as the first moment of a fine-tuned and ongoing “big breath,” she shares the latest evidence for the innate sentience that has guided our universal journey from simplicity to ever-greater complexity, diversity, and self-awareness--from protons to planets, plants, and people. She explains how evolution is not driven by random occurrences and mutations but by profoundly resonant and harmonic interplays of forces and influences, each intelligently informed and guided.

Currivan shows how, in Gaia, the Universe’s evolutionary impulse is embodied in collaborative relationships and dynamic co-evolutionary partnerships on a planetary scale and as a wholistic gaiasphere. She reveals how the conscious evolution of humanity is an integral part of Gaia’s own evolutionary progress and purpose. And, as she explains in vivid and moving detail, by perceiving and experiencing our planet as a sentient being and ourselves as Gaians, we open ourselves to a deeply ecological, evolutionary, and, above all, hopeful worldview.

Jude Currivan, Ph.D., is a cosmologist, futurist, planetary healer and previously one of the most senior business women in the UK. She has a master’s degree in physics from Oxford University and a doctorate in archaeology from the University of Reading in the UK. She has traveled extensively, worked with wisdom keepers from many traditions, and is a life-long researcher into the nature of reality. She is the author of 6 books, including The Cosmic Hologram, and is a member of the Evolutionary Leaders circle.