The Arsonist: A Mind on Fire (Paperback) 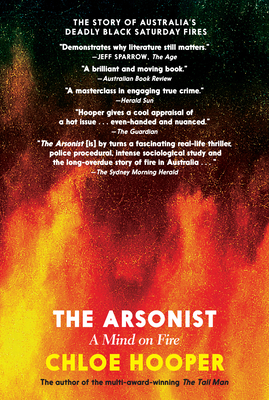 The true story of one of the most devastating wildfires in Australian history and the search for the man who started it.

On the scorching February day in 2009, a man lit two fires in the Australian state of Victoria, then sat on the roof of his house to watch the inferno. What came to be known as the Black Saturday bushfires killed 173 people and injured hundreds more, making them among the deadliest and most destructive wildfires in Australian history. As communities reeling from unspeakable loss demanded answers, detectives scrambled to piece together what really happened. They soon began to suspect the fires had been deliverately set by an arsonist.

The Arsonist takes readers on the hunt for this man, and inside the puzzle of his mind. But this book is also the story of fire in the Anthropocene. The command of fire has defined and sustained us as a species, and now, as climate change normalizes devastating wildfires worldwide, we must contend with the forces of inequality, and desperate yearning for power, that can lead to such destruction.

Written with Chloe Hooper’s trademark lyric detail and nuance, The Arsonist is a reminder that in the age of fire, all of us are gatekeepers.

Chloe Hooper's The Tall Man: Death and Life on Palm Island (2008) won the Victorian, New South Wales, West Australian and Queensland Premier's Literary Awards, as well as the John Button Prize for Political Writing, and a Ned Kelly Award for crime writing. She is also the author of two novels, A Child's Book of True Crime and The Engagement.

"An engrossing report brimming with urgent detail and palpable suspense. ... A gripping true-crime chronicle in which the justice is both righteous and agonizing." --Kirkus Reviews

"With propulsive energy, 'The Arsonist' follows the case .... The elemental terror of Black Saturday requires little embellishment, only the quiet dignity of witness. It’s this restraint — as intelligent as it is compassionate — that elevates 'The Arsonist' from slick true-crime procedural to cultural time capsule. ...A sharp-edged portrait of social as well a pyromaniacal desolation." --Beejay Silcox, The New York Times Book Review

"[A] gripping meditation on a tragedy whose ultimate causes implicate an entire society." --New York Times Book Review, 12 Books We Recommend This Week

"Hooper drops the reader inside the Black Saturday brushfires to terrifying effect, then masterfully shifts from the physical realm to the existential–namely, how and why a particular evil manifests. Visceral and terrifying." –Maureen Callahan, New York Times bestselling author of American Predator: The Hunt for the Most Meticulous Serial Killer of the 21st Century

"The book tells the story of the 2009 Black Saturday blazes in Victoria, which rank among Australia’s most deadly bushfires ... But it is also the story of post-industrial, semi-rural communities and lack of government regulation in the Anthropocene. The Arsonist‘s environmental setting may help readers understand the context for Australia’s current bushfire emergency." --Chicago Review of Books

"Add The Arsonist to Australia’s illustrious literature on bushfires. With skill and sensitivity, Chloe Hooper has managed to find an unexpectedly human face and heart amid the blackest depths of Black Saturday." —Stephen Pyne, author of Fire: A Brief History

Praise for the Australian edition of The Arsonist:

"Hooper gives a cool appraisal of a hot issue...even-handed and nuanced." --The Guardian

"The Arsonist [is] by turns a fascinating real-life thriller, police procedural, intense sociological study and the long-overdue story of fire in Australia...Powerful and nuanced...In Hooper's sure hands the grimmest details become exquisite imagery. " --The Sydney Morning Herald

"Gripping, gritty and unsparing but never gratuitous in its details, this is true crime writing at its best. But Hooper goes beyond the procedurals and the scene setting to examine the greater context of the tragedy." --The Saturday Paper