The Trail to Kanjiroba: Rediscovering Earth in an Age of Loss (Hardcover) 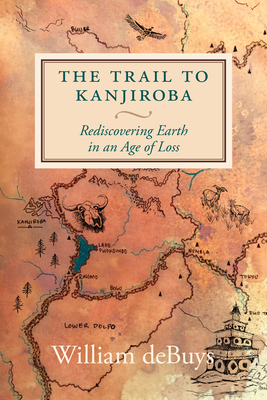 The Trail to Kanjiroba: Rediscovering Earth in an Age of Loss (Hardcover)

In 2016 and 2018 acclaimed author and conservationist William deBuys joined extended medical expeditions into Upper Dolpo, a remote, ethnically Tibetan region of northwestern Nepal, to provide basic medical services to the residents of the region. Having written about climate change and species extinction, deBuys went on those journeys seeking solace. He needed to find a constructive way of living with the discouraging implications of what he had learned about the diminishing chances of reversing the damage humans have done to Earth; he sought a way of holding onto hope in the face of devastating loss. As deBuys describes these journeys through one of Earth's remotest regions, his writing celebrates the land’s staggering natural beauty, and treats his readers to deep dives into two scientific discoveries—the theories of natural selection and plate tectonics—that forever changed human understanding of our planet. Written in a vivid and nuanced style evocative of John McPhee or Peter Matthiessen, The Trail to Kanjiroba offers a surprising and revitalizing new way to think about Earthcare, one that may enable us to continue the difficult work that lies ahead.

William deBuys is the author of ten books, including The Last Unicorn, one of Christian Science Monitor's 10 Best Nonfiction Books of 2015; River of Traps, a New York Times Notable Book of the Year and a Pulitzer Prize nonfiction finalist; The Walk (an excerpt of which won a Pushcart Prize in 2008); and A Great Aridness. In 2008-2009 he was a Guggenheim Fellow. He lives in New Mexico.
"Bill deBuys is one of the planet's great observers, and this may be his masterwork—a story of an exploration, of Nepal, but also of the present and future of this planet. Caring for that world, and all that's in it, is necessary, painful, and as he makes clear, exquisitely beautiful work."
—Bill McKibben, author of The End of Nature

"[One of] seven fascinating and purposeful new books [to] revive the mystery, the history and the possibilities of the reawakened planet. . . . deBuys argues for the value of 'care over cure,' not only for underserved communities but for the imperiled planet."
—Liesl Schllinger, The New York Times Book Review

"The Trail to Kanjiroba is a transformative path on the page by one of America’s most eloquent writers. Bill deBuys has written a walking prayer about beauty, hope, and longing in the service of human dignity and a living planet. Though set in Nepal in the high altitude grace of Dolpo, this is a spiritual pilgrimage contemplating the journey from grief toward love. Hands pressed together, I hold these words close and bow.”
—Terry Tempest Williams, writer-in-residence, Harvard Divinity School

"A self-reflective journey from despair that the Earth is dying to the realization that even a world irrevocably changed by humanity is beautiful and worth protecting.
It is easy to fear the future when the air is heating up, the seas are rising, and species are disappearing in the ongoing sixth extinction. But where there is hope—not the conviction that something will turn out well but the certainty that it makes sense, regardless of the outcome—there is a reason to care. In his latest, Pulitzer Prize finalist deBuys brings many of the most appealing attributes of memoir and travel and nature writing to bear on humanity’s most significant existential crisis. In 61 brief chapters, which read like travel journal entries, deBuys weaves together geological and evolutionary histories and studies of the planet’s peoples and biodiversity within the context of his participation with the Nomads Clinic, which provides medical care to communities in Nepal’s remote Upper Dolpo region. The author makes a convincing case that even if we cannot cure the ills we have wrought on the Earth, we should still care for it—and for ourselves—as best we can. In the shadow of the Himalayas and its rapidly melting glaciers, the clinic’s medical team brings hope, care, and the rare antibiotic to people living otherwise happy and rewarding lives. While climate change is dire and possibly even irreversible, deBuys finds beauty and solace nonetheless. “My work has taken me to badly disturbed environments where losses are high and prospects for improvement slim,” he writes. “But most of these places have also overflowed with beauty. They have fundamentally changed how I see the world. Studying the climate system has had a similar effect, revealing the complexity of the natural world in new and deeper ways.” The author includes a helpful glossary of terms that may be unfamiliar to many readers.
A pleasing ray of positivity regarding the planet’s present and future."
—Kirkus Reviews

"Dolpo has been a land of inspiration for many people over many centuries. I am glad to see that it inspired my friend Bill deBuys to share this important message about our Earth and ourselves."
—Dolpo Tulku Rinpoche

"Written in the spirit of Mathiessen's Snow Leopard, The Trail to Kanjiroba is a pilgrimage into the unknown of the inner realms. DeBuys's heartfelt, raw, poetically written personal peregrination is a true service to life on an increasingly disrupted planet."
—Dahr Jamail, author of The End of Ice: Bearing Witness and Finding Meaning in the Path of Climate Disruption


"William deBuys’s The Trail to Kanjiroba is both the story of the author’s journeys to Upper Dolpo, an isolated area in northwestern Nepal, and an analysis of the scientific advances that have helped humans interpret the natural world over the course of centuries. It is a work of close attention to a unique landscape, the kind of story that will only grow more important as landscapes of all kinds fall under the threat of human-caused destruction and climate change." –from Lit Hub’s Summer Nonfiction Preview