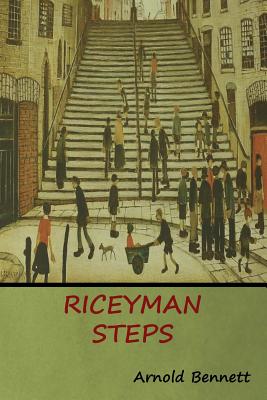 Riceyman Steps is a novel by British novelist Arnold Bennett, first published in 1923 and winner of that year's James Tait Black Memorial Prize for fiction. It follows a year in the life of Henry Earlforward, a miserly second-hand bookshop owner in the Clerkenwell area of London.

Arnold Bennett was a keen amateur sailor and it was while on sailing trips on the Solent he discovered a chaotic second-hand bookshop in Southampton. He would visit the shop when bad weather prevented sailing and on one visit he bought a book on misers for sixpence. This book and the shop itself became the inspiration for this novel. Bennett also loved the Clerkenwell district of London which with its unpretentious working class life reminded him of his own origins in the Potteries. The location Riceyman Steps was modelled on Granville Place (now Gwynne Place) the steps of which lead up from the Kings Cross Road to Granville Square. Bennett's steps are "twenty in number, ... divided by a half-landing into two series of ten", whereas the steps of Granville Place number (from the bottom) fifteen, with eleven more from the half-landing. Granville Square, now a residential square containing a small park, was in 1923 dominated by St Philip's Church, which was demolished in 1936. (wikipedia.org)