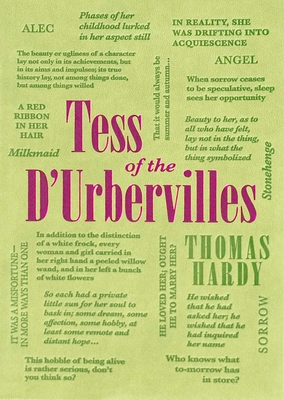 
Usually Ships in 1-5 Days
A classic novel that explores how the moral standards of Victorian England affected a young woman seeking her place in society. This beautiful flexibound edition also features bright foil on the cover.

Thomas Hardy’s classic novel Tess of the D’Urbervilles is a masterpiece of late 19th-century literature, presenting the story of Tess, a poor girl from rural England who faces the challenges of modern society while carrying a moral burden that threatens her reputation. As she navigates the difficult path to adulthood, Tess encounters numerous setbacks, each moving her further away from who she was as a young girl. With themes such as humanity’s loss of its connection to the natural world and how Victorian morals oppress personal growth, Hardy’s novel is an essential read for all lovers of classic literature.
Thomas Hardy (1840–1928) was a poet and novelist from the United Kingdom. His best-known works include Far from the Maddening Crowd (1874), Tess of the D'Urbervilles (1891), and Jude the Obscure (1895).