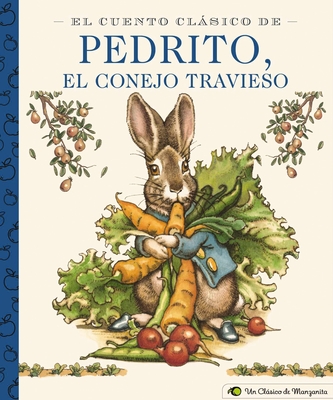 
Email or call for price.
Come along on an adventurous journey with the world's most beloved bunny, Peter Rabbit, in The Classic Tale of Peter Rabbit. This beautiful Little Apple Classics Spanish edition features illustrations by award winning artist, Charles Santore.

Valuable lessons can be learned from the mischievous and disobedient Peter Rabbit as he ignores his mother’s warning about Mr. McGregor and his vegetable garden. As Peter gets into trouble, he’ll have to ask for help to find a way home. These timeless children’s classics provide kids with tales about values, morals, and virtue.

The Classic Tale of Peter Rabbit:

- Makes a great gift for baby showers, spring holidays such as Easter, or birthdays
- Is perfect for bedtime and family reading, or preschool lessons
- A wonderful classic to add to family collections

The critically-acclaimed illustrator, Charles Santore, has been celebrated with recognitions such as the prestigious Hamilton King Award, the Society of Illustrators Award of Excellence, and the Original Art 2000 Gold Medal from the Society of Illustrators. He is best known for his luminous interpretations of classic children’s stories, including The Night Before Christmas, Alice's Adventures in Wonderland, Aesop's Fables, The Little Mermaid, Snow White, The Velveteen Rabbit, The Wizard of Oz, and more!
Helen Beatrix Potter was an English writer, illustrator, natural scientist and conservationist; she was best known for her children's books featuring animals, such as The Tale of Peter Rabbit.

Charles Santore renowned illustrations have been widely exhibited in museums and celebrated with recognitions such as the prestigious Hamilton King Award, the Society of Illustrators Award of Excellence, and the Original Art 2000 Gold Medal from the Society of Illustrators. Santore is best known for his luminous interpretations of classic children’s stories such as Snow White, The Night Before Christmas and Henry Wadsworth Longfellow’s Paul Revere’s Ride, which was named 2004 Children’s Book of the Year for Poetry by the Bank Street College Children’s Book Committee. His illustrations for The Wizard of Oz, which is widely considered to be the quintessential illustrated version, were used as the scenic backdrops for a major television performance of the work.