The Book of Ephraim: The Story and Prophecy of the Thirteen Tribes of the House of Israel (Hardcover) 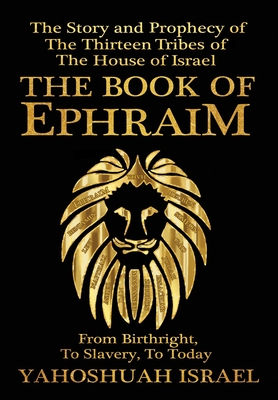 The book of Ephraim is about the thirteen tribes of ancient Israel and, particularly, the 10 lost tribes that went into Assyrian slavery 131 years before the better known Babylonian captivity of the Southern kingdom called the Kingdom of Judah. The northern 10 tribes where known as the Kingdom of Israel. Unknown to most the Nation of ancient Israel split into two kingdoms after King Solomon's death and for hundreds of years quarreled and warred with each other. Although the southern kingdom of Judah returned from Babylonian captivity after 70 years, the 10 tribes of which Christ Yeshua (Jesus) refers to in the New Testament as the "lost sheep of the House of Israel", never returned to the holy land.

The Book of Ephraim follows the biblical narrative as the tribes led by Moses develop from a mass of newly freed slaves into a loose assembly of Houses mostly governed by their own Princes. Under King David they are molded into a strong powerful nation. Under King Solomon Israel finally flourishes. It illustrates how the one nation eventually breaks up into two warring kingdoms and both kingdoms lose their way and descend into idolatry and finally are brutally scattered to the four winds, as prophet after prophet prophesied to the people would happen.

It shows the connections to them and the historic and current day persecutions of western hemispheric descendants of Africa and particularly the birthright tribe of Ephraim.

Ephraim was the second born twin of Joseph of the bible. He was born in Egypt, the land that his father was sold into slavery by his brethren but rose up to be a ruler in the land second only to Pharaoh. It explains that this little known tribe has always been the birthright tribe yet has been lost to history and forgotten and not unintentionally.

The Book of Ephraim also speaks to the sacredness of name of the Almighty which every prophet testified to yet this ancient memorial name has been purposely pushed aside and the word "god" exalted in its place. It magnifies the memorial covenants established between the Ancient Nation of Israel and Yahovah their deliverer and how these covenants were violated and brought about the wrath of the Almighty until He removed them out of his sight.

Among other things the Book of Ephraim quotes many of the holy books like the Muslim Holy Quran, the Ethiopian Kebra Negast and the Bible of Christianity in its search for answers to the age old questions that haunt every black man and woman in their quest for justice and equality. And finally it delivers the reader to a controversial conclusion that is impossible to dispute.

Mr. Israel's book is the evidence of a remarkable awareness of Ethiopian ancient history and our historical legends that are the foundation of the church. The Kebra Negast and the prophecies of the bible records these legends that are not known to the world as yet but with his book I am sure they will come in to prominence.

The Book of Ephraim highlights biblical passages and prophecies that before now were unknown. It reveals many mysteries that have gone unknown until now.