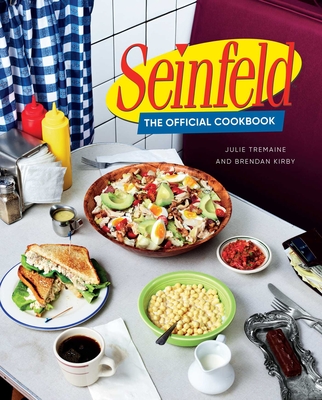 From Jerry’s kitchen to Monk’s café, food is central to many of Seinfeld’s most memorable moments, and this official cookbook teaches fans to prepare favorite dishes from the show right in their own homes!

Stash the takeout menus and cancel reservations at Mendy’s, it’s time to stay in for a taste of New York City as only Seinfeld: The Official Cookbook can deliver in this collection of more than 60 recipes inspired by the hit ‘90s sitcom.

For a show about “nothing” one constant throughout Seinfeld’s nine seasons is food! Jerry, Elaine, Kramer, George, and the whole gang are always talking about food, shopping for food, or grabbing a bite in Monk’s coffee shop! There are contemplations on the black and white cookie, the Big Salad, proper (or improper) shrimp cocktail etiquette, an irresistible soup stand, lobster revenge omelets, the proper ranking of babka varieties, mouthwatering mackinaw peaches, and so much more. Now these culinary comedy classics are celebrated with a variety of recipes that will help any Seinfeld fan relive their favorite moments.

Seinfeld: The Official Cookbook offers a variety of recipes for chefs of all levels. From appetizers to main courses and from drinks to desserts, each chapter includes delicious show-focused food that will have diners raving, “It’s like a circus in your mouth!”

60+ RECIPES INSPIRED BY SEINFELD: Ever wondered “What’s the deal…?” with the delicious eats and treats that Jerry and crew enjoy on the show? Seinfeld: The Official Cookbook let’s you experience mealtime as part of the Seinfeld world.

NO SOUP FOR YOU!: Just kidding, there’s recipes from all the greatest food moments in the show that will have fans of all ages gathering around the table to swap favorite Seinfeld scenes!

THE FIRST OFFICIAL SEINFELD COOKBOOK: The only cookbook with official recipes directly inspired by Seinfeld! The perfect gift for the Seinfeld fan in your life.

RECIPES FOR ALL SKILL LEVELS: With accessible step-by-step instructions and helpful cooking tips, Seinfeld: The Official Cookbook is a great guide for fans of any age and skill level, from kitchen novices to seasoned chefs.
Julie Tremaine is a food and travel writer whose work has appeared in outlets such as Forbes, Bloomberg Next, Yahoo!, Yankee Magazine, and Providence Monthly, where she was executive editor and creative director. Read more of her writing at Travel-Sip-Repeat.com.

A self-proclaimed "Master of the Seinfeld domain," Brendan Kirby has been obsessed with "Nothing" since he first saw the show in eighth grade. Helping to greatly inspire his love of comedy and joke writing, the show was a focal point of his formative years — the result of having absolutely no life whatsoever in high school; eerily similar to his life today. He makes his home in Rhode Island, and you can catch him weekdays at 9am on the CBS affiliate in Providence as co-host of the daily, live entertainment talk program, The Rhode Show—a career that enables him to do three of his favorite things: make jokes on TV, wear makeup, and write his own fan-mail under the name Bob Sacamano. You can follow him on social media @ BrendanKirbyTV.