Singing the Winn/Dixie Blues and other Short Stories. (Paperback) 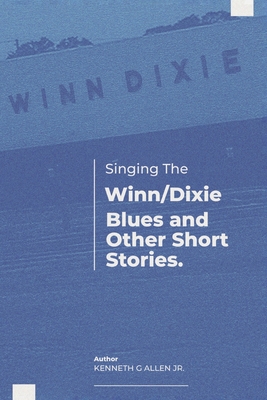 A Chocolate Kiss –Off: A young teenager is hired and discovers that the older cashiers don't much like grocery-baggers because, with tips, their wages are higher. He tangles with an older cashier named Gail whose emotional, physical and spiritual well being depends on how much chocolate she's eaten that day.
My Listening Corner: A middle aged, store bookkeeper and head cashier Birdie-Lee, wages passive aggressive warfare against a young brash arrogant impulsive store manager who is short-tempered and temperamental. She finds a place in the store where she can overhear what people are saying about her in the manager's office nearby but doesn't always like what she hears.
Dancing With the Devil: Doris Ann, a young somewhat disturbed cashier visits a therapist and describes in detail her involvement in a religious cult.
Singing the Winn/Dixie Blues: A black store manager, Mr. Prichard , has to deal daily with surly employees, arrogant executives, and insane customers. He's a true tragic hero who deals with racial, moral and ethical issues.
Moon Dreamer: Is a story about a produce clerk who struggles to find meaning in a mindless job.
My Lucky Creed: A young burglar breaks into a store and gets seriously injured in a fall through the ceiling. While he lays on the backroom floor, he reflects on what happened in his life to get him to this point.
Up In Smoke: Is a fable about a man who comes into a store and passes out fifty dollars to anyone who would sell their soul to the devil. Is he really the devil? Who knows?
Need: Looks at employee theft from the point of view of a young stocking clerk who is stealing asthma inhaler medicine for his sister and gets caught.
Security Check: Two men are sitting in a security booth watching customers who shoplift on a video screen. They make running comments on what they see below. They think they are lions on the hunt, but are they?

The Electric Toque Machine: Three marines go down into Mexico on a weekend leave and play an electric shock machine in a bar that tests their manhood.

Leslie's Last Concubine: A lawyer in a large firm finds American women to be too competitive for his tastes and goes to Russia to get a girlfriend. He gets more than he bargains for and learns that his real solution to his love search is next door and not across the world.

A Teacher's Travail: A story about a burned out English teacher trying to teach a poem to some bored and uninterested students. He finds a kindred spirit.

The Drag Queen: This is a very short tongue-in-cheek tale about a guy who goes to a wedding and has an interesting reaction.

Kenneth Allen lives in Decatur Georgia and has published eleven short stories in the literary market. His stories have appeared in: The Chattahoochee Review, Chicago Quarterly Review, Storyteller, Love's Lost and Found, an anthology, Struggle, Long Story Short, and an honorable mention in Writers Digest story contest. He has been a guest speaker at Mercer University where he gives a short story class. Kenneth has two novels published and a third soon to be published. He was a store location manager for Winn/Dixie and worked for them for twenty years from 1970-1990. He takes the lives of ordinary working people and shows how they deal with moral and ethical issues. He has two published novels, The Golden Cockerel: A New Odyssey and Dragon Curse. These novels are set in the Ancient Roman World. A third one will be out soon called The Red Cord.