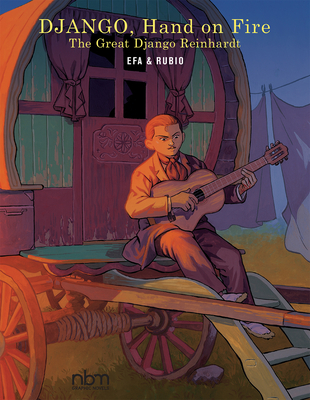 Django Reinhardt is a legend. But Django -which may have meant "He who wakens"- was twice born. A first time in the snow, during the winter of 1910 in a nomadic gypsy family stationed in Liberchies, Belgium. The second in Saint-Ouen, near Paris, in the fall of 1928, when a fire in his caravan mutilated his left hand. Writer Salva Rubio and artist Efa have already produced together a remarkable biopic on Monet, paying tribute to the painter's obsession with light. Likewise, this biopic devoted to the youth of the prodigy musician features the passion and determination of the man who has always considered himself the greatest guitarist in the world. In this story-score, by laying out the panels like chords, the artist brings to life his passion in vibrating watercolor to better accompany the musical and technical development of the inventor of gypsy jazz. From musette to jazz, from violin to banjo then to guitar, Django's destiny is that of his ‘hand on fire’, possessed by the supernatural spirit of the "duende" which burns in the soul of each gypsy musician. That of a miracle who is reborn from his ashes, more dazzling than ever. Cue the music!

Salva Rubio is a Spanish writer specialized in history. With a master’s degree in scriptwriting, he has been involved in many documentaries, short, and feature length films. He also wrote the Monet biography with Efa (NBM). EFA is a pen name for Ricard Fernandez, a Spanish artist who left school at 16 to pursue his dream of being in comics. He has since published quite a few graphic novels and series. He also did the art for the superb Monet biography (NBM).

"The art provides crucial visual details, from subtle facial expressions to the rich backgrounds of a Roma camp, jazz club, and hospital. It includes a kind of soundtrack, too, naming song titles that are supplemented by an enlightening afterword with photographs. Django, Hand on Fire is a fascinating account of the crucible in which an artist’s second life was forged." —Peter Dabbene, reviewer for Forward

"A passionate rendering of a fiery life." —Publisher's Weekly