Political, Social and Religious Studies of the Balkans - Volume I - The Suffering of the Serbs in Sarajevo during the Bosnia War (1992-5) (Paperback) 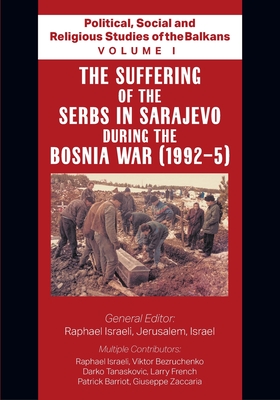 Since the end of the Bosnia War in 1995, a tradition was embraced by the West of vilifying the Serbs as the villains, and the Muslims as their victims.

This necessitated the military intervention of the U.S. and NATO on the Muslim side, which caused an untold travesty of justice to the Serbs. For indeed, there was enough blame to go around to condemn all parties in that war, including Serbs, Croats, and Muslims, of committing massacres and huge abuses of the other parties.

To single out the Serbs as the bad guys simply distorts the facts.

This collective volume, which is the product of a Commission of Inquiry, worked 18 months on this project, redressing the balance based on a meticulous and well-documented report about the process of this inquiry, step by step.

General editor Raphael Israeli has taught Islamic, Chinese, and Middle Eastern history at Hebrew University in Jerusalem. A graduate of Hebrew University in history and Arabic literature, he earned a Ph.D. in Chinese and Islamic history from the University of California, Berkeley. Now retired, he has been a Fellow of the Harry Truman Research Institute at Hebrew University and the Jerusalem Center since the 1970s, and is the author of over 60 research books, a dozen edited books, and 100 scholarly articles about Islam.