The Accidental Admiral: A Sailor Takes Command at NATO (Paperback) 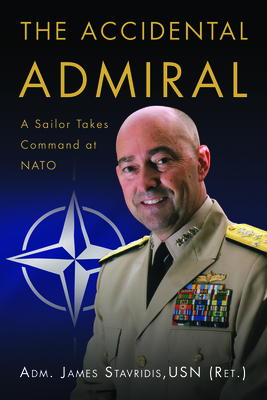 The Accidental Admiral: A Sailor Takes Command at NATO (Paperback)


Usually Ships in 1-5 Days
After he was selected to be NATO's sixteenth Supreme Allied Commander, The New York Times described Jim Stavridis as a "Renaissance admiral." A U. S. Naval Academy graduate with a master's degree and doctorate from The Fletcher School of Law and Diplomacy at Tufts University, conversant in both French and Spanish, this author of numerous books and articles impressed the Navy's leaders and senior Pentagon civilians with his wide range of interests, educational background, keen understanding of strategic doctrine, mastery of long-range planning, and command of international affairs. Since NATO had previously been led by generals, Stavridis saw his assignment as the first admiral to take command as somewhat "accidental." As the American and NATO commander in Europe responsible for 120,000 coalition troops serving in fifty-one nations, on three continents and at sea he had come a long way since almost leaving the Navy for law school five years after receiving his commission. The Accidental Admiral offers an intimate look at the challenges of directing NATO operations in Afghanistan, military intervention in Libya, and preparation for possible war in Syria--as well as worrying about the Balkans, cyber threats, and piracy, all while cutting NATO by a third due to budget reductions by the twenty-eight nations of the alliance. More than just describing the history of the times, Stavridis also shares his insights into the personalities of President Barack Obama, Secretary of State Hillary Clinton, Secretaries of Defense Robert Gates, Leon Panetta, and Chuck Hagel, Afghan President Hamid Karzai; Generals David Petraeus, Stanley McChrystal, John Allen, and many more. Known as an innovator and an early adopter of technology and social media, Stavridis' ability to think "outside the box" and sail in uncharted waters is unmatched. He shares his insights on leadership, strategic communications, planning, and the convergence of threats that will confront the United States and its allies in the near future. Stavridis is an advocate of the use of "Smart Power," which he defines as the balance of hard and soft power. He explains that in creating security in the twenty-first century it is critical to build bridges, not walls, and stresses the need to connect international, interagency, and public-private actors to achieve security.
Adm. James Stavridis, USN (Ret.) is a 1976 distinguished graduate of the U.S. Naval Academy who spent over 35 years on active service in the Navy. He commanded destroyers and a carrier strike group in combat and served for seven years as a four-star admiral, including nearly four years as the first Navy officer chosen as Supreme Allied Commander for Global Operations at NATO. After retiring from the Navy, he was named the dean of The Fletcher School of Law and Diplomacy at Tufts University in 2013. In addition, he currently serves as the U.S. Naval Institute's Chair of the Board of Directors. He has written articles on global security issues for The New York Times, The Washington Post, Atlantic Magazine, Naval War College Review, and Proceedings and is the author or co-author of several books, including Command at Sea 6th Ed. and Destroyer Captain.