A Time of Innocence: A Generation of Unrestricted Freedom; Strict Discipline; Keeping up with the Joneses; Socially... (Paperback) 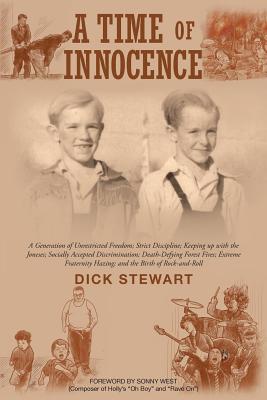 Richard Stewart is one of those large numbers of fanatical early '60s rock-and-roll guitarists, who never received national attention and all its glory but, instead, came darn close regardless of the frequent and, on occasion, precarious roadblocks that he encountered, especially during the innocent years of early rock and roll. He endured excessive corporal punishment at school and at home; he explored and mapped privately owned lots in which he and his neighborhood, preteen gang members built forts; he was a Pachuco in an Hispanic gang while in high school; he witnessed despicable bigotry toward Native Americans, Mexican Americans, and African Americans; he fought forest fires in the Pacific Northwest, one of which nearly took his life; he suffered extreme hazing at the hands of his Kappa Sigma active brothers at the University of New Mexico; and the arrival of the Beatles in America dashed his dream of having a national, rock-in-roll guitar instrumental hit.

All musicians, high profile or not, of this new mainstream music genre that the teens embraced and called their very own, have an interesting story to tell, but most of the wannabe breakout artists just keep putting it off. Well, this writer didn't.

Stewart's experiences from the moment the Second World War ended in July of 1945 to the beginning of the psychedelic rock period in 1967 are just too powerful, suspenseful, historic, excruciating, humorous, scary, and on occasion, downright life threatening that needs to be told in detail. This is a read that you will have difficulty putting down.