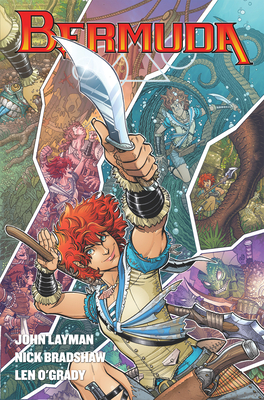 There's a region in the Atlantic Ocean where planes disappear, ships are lost, and traveling souls go missing... never to be heard from again. And there's an island within this place, mysterious and uncharted, untouched by time and civilization, where all who are lost end up.

It’s a mysterious place inhabited by dinosaurs, pirates, crazed magicians, strange monsters... and a girl named Bermuda. Sixteen-years-old, scrappy, and a survivor, this has been the only life she has ever known. Until today. Today she discovers something on her island that will either open a doorway between her world and ours... or destroy them both!
John Layman is the creator, writer and letterer of Chew, the New York Times best-selling, Harvey Award and multi-Eisner Award winning cannibal cop comedy series. Layman was an editor for WildStorm Productions and has written or lettered for every major publisher in comics for the last decade and a half. He's written Cyclops, Detective Comics, Mars Attacks, Godzilla, Aliens, Thundercats, Gambit, Scarface, Red Sonja, Marvel Zombies Vs. Army of Darkness, House of M: Fantastic Four, the Marvel Identity Wars Annuals, Stephen Colbert's Tek Jansen... and a whole lotta other stuff. He's currently the writer of Leviathan with artist Nick Pitarra and Outer Darkness with artist Afu Chan.
"Bermuda is a vivacious heroine who’ll appeal to fans of Moana or Merida, and Bradshaw’s art nimbly infuses panels with kinetic energy, through an inventive, eerie landscape." —Publishers Weekly