Tell Me Why You Fled: True Stories of Seeking Refuge (Paperback) 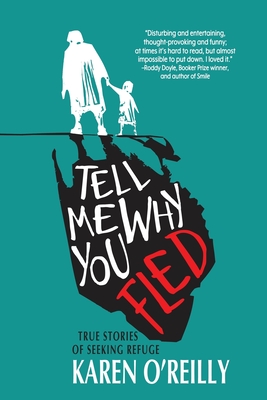 When Karen O'Reilly's 28-year-old friend and roommate dies by suicide on a bright New Year's Day, Karen, also suffering from severe depression, decides that she needs to do something drastic to avoid following a similar path. Six months later she leaves her comfortable western existence behind to work with refugees in Uganda.

In this candid and irreverent memoir, Karen tells the story of working with people seeking refuge -- from war, and torture, and genocide -- as a young woman seeking refuge from herself. She describes the unexpected connections she makes with the refugees with whom she works: the Somali woman who, pitying her, prays for her to find a husband; the suspected Rwandan g nocidaire who argues with her about soccer and makes her undrinkable coffee; the transgender Burundian woman who commissions a matching rooster-print blouse and skirt for her, as a thank you gift. Outside of work, she tries to forget the corruption and sexual abuse she is shocked to encounter in the humanitarian world. She drinks gin, dances at illicit gay bars, sees local psychiatrists with unorthodox ideas, and tries to make sense of the refugees' stories and her own.