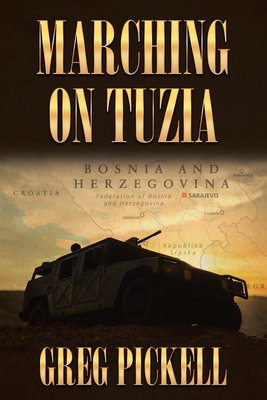 Marching on Tuzla is the story of two professional military officers, forced into conflict in the turbulent geopolitics of the Balkans in the 1990s. Initially unaware of each other, the two men find professional satisfaction and career success as they grapple with their demons. Darius Grant, a West Point graduate disillusioned by the Army's detachment from the realities of modern combat, resolves to right at least some of the wrongs he sees affecting the safety of his men. Alekse Savic, a Bosnian Serb nationalist and gifted military leader and planner, commits himself to the preservation of his homeland in Serb-controlled Northern Bosnia. International politics and strategy bring them into conflict as each attempts to attain his goals. Along the way, they find love in the arms of Megan Rostov and Zhanna Anisimov, women as accomplished and driven as themselves. The climatic events at the conclusion of this story find the two men in direct confrontation in the hills of Central Bosnia, with victory hanging in the balance.