The House of Wolves: The Tether (Paperback) 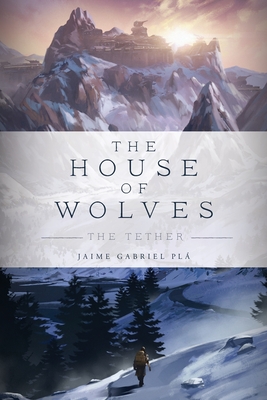 Generations after the modern era was erased from history, Earth's population has diminished to a few million people farming on a snowball planet. In the Solar System, the Humans are a distant second to the Velka, a powerful race of collectivists who have settled throughout Man's old dominions. Hot wars between several Velkan Houses have reshaped the face of the solar system, and their cold wars see humans used as proxy fighters. Conflict between the dominant Velka on Earth, the House of Wolves, and the insidious House of Serpents of Venus is about to boil over.

A freelance Human gunslinger, Dorin, was orphaned as a youth and lived a life of violence and crime to make ends meet and satisfy his life partner Ashton's gambling debts. After being shot in the back and left for dead by Ashton, Dorin is saved by a sympathetic Velka Wolf named Etkis. They quickly forge a lifelong friendship. Several years later, Dorin discovers Serpent spies have entered Wolven territory. The Jarl rewards Dorin and offers him citizenship, which makes Dorin an instant enemy of the disgraced security chief.

The Jarl gives Dorin a mission to discover a possible connection between the Serpent threat and the remaining Humans. This leads Dorin back to his hometown of Alexandria, the scene of the fire that claimed his parents. There, he must confront his troubled past in more ways than one. He and Etkis are soon thrust into a violent and deadly game of intrigue, cat-and-mouse, romance, and all-out war.

Fans of Dune, Westworld, and Firefly are sure to enjoy this page-turning sci-fi Western.