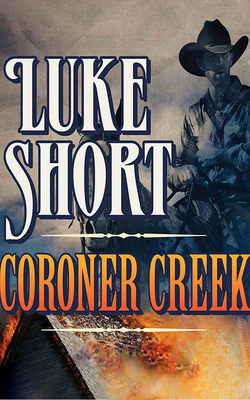 A gunfighter rides high and low on a manhunt for the Apache who killed his fianc e in this blazing story of revenge from a master storyteller of the West.

The army wagon train carried rifles, ammunition, and a chestful of gold through Apache territory, where every white man was a target. With the soldiers rode a single stagecoach carrying the woman whom Chris Danning planned to marry. When the train passed through Karnes Canyon, an Apache raiding party stormed out of the shadows, and the creek ran red with blood.

For 18 months now, Danning has searched for the Apache who attacked the wagon train and killed his fianc e. He's also hunting the corrupt white man who sold the soldiers out. With the help of a grizzled Indian scout, Danning finally gets the name of the Apache chief and a description of their informer. When he finds them, the real battle will begin.

A truly unique saga of vengeance and obsession in the American West, Coroner Creek - which was made into a 1948 Columbia Pictures film starring Randolph Scott - explores the darkest parts of the cowboy soul.