Guns and Gods in My Genes: A 15,000-mile North American search through four centuries of history, to the Mayflower (Paperback) 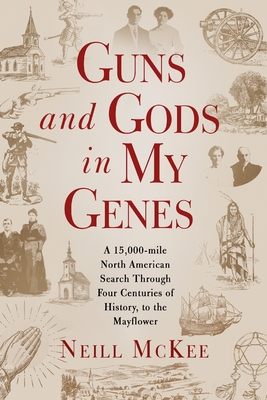 Guns and Gods in My Genes: A 15,000-mile North American search through four centuries of history, to the Mayflower (Paperback)

Neill McKee, author of the award-winning travel memoir Finding Myself in Borneo, takes the reader through 400 years and 15,000 miles of an on-the-road adventure, discovering stories of his Scots-Irish ancestors in Canada, while uncovering their attitudes towards religion and guns. His adventure turns south and west as he follows the trail of his maternal grandfather, a Canadian preacher who married an American woman in Wisconsin, and braved the American Wild West. Much to his surprise, McKee finds his American ancestors were involved in every major conflict on North American soil: the Civil War, the American Revolution, and the French and Indian War. In the last chapters, McKee discovers and documents his Pilgrim ancestors who arrived on the Mayflower, landing at Plymouth in 1620, and their Puritan descendants who fought in the early Indian Wars of New England. With the help of professional genealogical research, he tracks down and tells the stories of the heroes, villains, rascals, as well as, the godly and ordinary folk in his genes, discovering many facts and exposing myths. He also lets readers in on a personal struggle: whether to apply for Canadian-United States dual citizenship or remain only a Canadian.

The author employs vivid descriptions, dialogue, poetic prose, historic poetry, analytical opinion, and over a hundred photos and illustrations. For example, in a detective-like investigation he takes the reader back to the scenes his preacher grandfather encountered in Newcastle, Wyoming, during 1905-06-then a town with a two-story brothel across the street from his church, as well as a sheriff who owned a saloon with a dance hall, and carried a gun with 20 notches on its handle. McKee visits some of the exact places his ancestors fought and were wounded or killed. He describes encounters with exuberant historians clad in period costumes in ancient forts, and humorous interactions with actor-educators playing the part of Pilgrims at the reconstructed Plymouth Plantation. He takes the reader on serendipitous happenings, such as meeting a distant cousin who's a flower farmer in Western New York State and who has studied their mutual family history in the US and England, dating back twenty-eight generations to the Norman invasion. Throughout the chapters, McKee discovers the importance of following female lines of descent in genealogical research. He also documents socio-religious values and trends, the history of settlement and its impact on North America's indigenous people, as well as the increasingly strict gun control in Canada, compared to the opposite in USA.