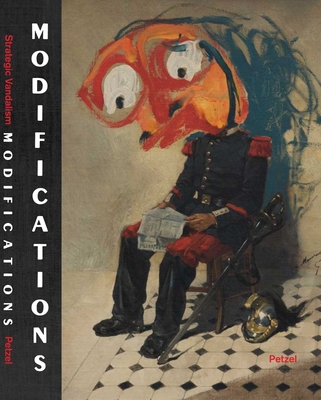 A comprehensive catalogue of the exhibition Strategic Vandalism: The Legacy of Asger Jorn’s Modifications Paintings on view at Petzel Gallery in New York from March 5th to April 13th, 2019. With texts written and edited by the curators as well as reprinted articles on the subjects of détournement, vandalism, and the relationship between modifications and appropriation art in the late 1970s.

If you have old paintings, do not despair. Retain your memories but detourn them so that they correspond with your era. Why reject the old, if one can modernize it? —Asger Jorn

Published on the occasion of the exhibition Strategic Vandalism: The Legacy of Asger Jorn’s Modifications Paintings at Petzel Gallery in New York (March 5 – April 13, 2019) – this historical group show of over 30 prominent international artists investigates multifarious appropriation methods situated in the context of the first thrift store paintings altered by Danish artist Asger Jorn. Spanning from the mid-1960s to the flourishing techniques of the 1980s, up to the present day.

In Paris, 1959, Asger Jorn exhibits a group of paintings at the prominent Galerie Rive Gauche. Not only has he re-worked these found paintings with his own brush, modifying their respective surfaces, but he also writes a text describing his technique as a recovery of certain iconographic archetypes. Instead of making a mockery of these kitsch paintings, he articulates some of their inherent folk-art values. The exhibition is not well received. However, it has since become legendary. Jorn’s modifications have long been a neglected chapter in the Danish artist’s biography. Yet from today’s perspective these high/low hermaphrodites are recognized by keen-eyed viewers as mirrors reflecting the historicity of modern painting.

Such “Modifications” are a painterly version of “détournement,” a Situationist technique, described in 1956 by Guy Debord and Gil Wolman as the systematic revaluation of “prefabricated aesthetic products.” For Jorn, who co-founded and financially supported the Situationist International, the 1959 Galerie Rive Gauche exhibition, showcased his implementation of a fundamental aesthetic critique in which he appropriates a relatively discredited artistic source as “his” own material, then applies his iconography, and his language to that particular prefabricated model.

Axel Heil is an artist, curator, writer, and producer. He is the founder of fluid editions, a production platform for a wide range of projects and artistic research. Since 2001 he is Professor for “Experimental Transfers” at the Staatliche Akademie der Bildenden Künste in Karlsruhe. Recently he has published essays in Jorn-Picasso: Myths and Meetings (Silkeborg, 2014) and Jorn & Pollock: Revolutionary Roads (Louisiana, Humlebæk, 2014) and In the Beginning Was the Image: Asger Jorn in the Canica Art Collection (Silkeborg, 2016) as well as the book Asger Jorn: The Open Hide (New York, 2016) in collaboration with Roberto Ohrt.

Roberto Ohrt lives in Hamburg, received his doctorate in 1988 from the University of Hamburg (Phantom Avantgarde, 1990), and has published numerous works on the history of modern art (with a focus on the Situationist International) and artists such as Martin Kippenberger, Raymond Pettibon, André Butzer, and Albert Oehlen. He has taught as a visiting professor in Munich, Frankfurt, and Kassel and curated exhibitions at the Center Georges Pompidou (1993), Golden Pudel Club (1993-2001), Museum der Moderne (with Margrit Brehm, Salzburg, 2005) and 8.Salon (2010-2015). Co-founded the Akademie lsotrop (1996-2001) and 8.Salon (since 2009).