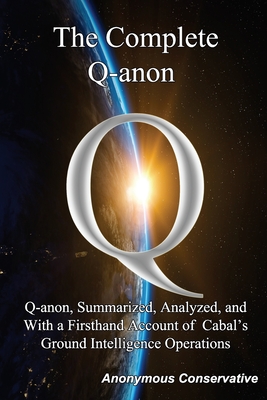 For years, an anonymous internet personality calling himself "Q" has posted messages offering inside information about a hidden global struggle for control over the entire world. It was a struggle occurring between a criminal conspiracy of ultra-wealthy elites who used their wealth to corrupt intelligence agencies and governments, and a select group of Military Intelligence professionals and assorted patriots. As he has posted, a rapidly growing coterie of followers has hung on his every word. This book is written by one of Q's followers, who has had extremely close interaction with one facet of the conspiracy Q describes. Long before Q arrived, I had seen firsthand that things were going on in America which nobody would believe, and I was not alone. Only Q connected the dots to produce a reasonable explanation for what I saw.

This book consists of two halves. The first half of the book is a standalone work which details Q's story and offers the evidence supporting it's veracity. In doing so, it documents the hard evidence and specific events which led his followers to not only accept such an incredible story, but to devote their own time and energy to Q and his movement. It will then progress to a description of what Cabal's operations look like if you have the misfortune to run into them in person. It then substantiates and fleshes out this model of the Cabal using respected news articles and government documents, showing where Cabal's operations have frequently bubbled up into the media, to a point it could not be covered up.

The second half of the book offers an archival reprinting of Q's first 400 posts as they appeared online, with a summary of the analysis that emerged at the time. This offers the reader the opportunity to go back and look at how Q was revealing real intelligence, and showing his readers how the media assiduously covered up this amazing story for their masters in the Cabal, as it also accliamte them to reading Q's posts and understanding how he presented information.

Cabal is the most fascinating organization you will ever lay eyes on. After centuries of operating, it has infiltrated loyal operatives throughout every government office, news organization, business, and social organization with any influence or power. It has millions of regular citizens who pledge loyalty to it, and live among us secretly. They all know the big secret - that the United States we see on TV is actually controlled by this Secret Society, and our free republic, elected by the people, is a myth designed to keep us placid and under control. The extent of Cabal's scope, how it has identified every position of power it needed to exert influence, and every position which threatened its capability, and compromised them through infiltration or blackmail is amazing to behold. The Secret Society of spies it runs covertly against all of America and the way in which it has knowingly transgressed against every citizen in the country is unbelievable. And the way in which so many people within the Secret Society were privy to this massive secret, and yet the secret never made it into the public's consciousness boggles the mind.

This book limits itself to the most basic description of Q's assertions, the most fully substantiated facts regarding the Cabal's operations, and direct observations of the author. There are more detailed, and even esoteric explanations attributed to Q's posts out there which may be accurate. However by limiting the scope of this work in that way, it is hoped that once the reader realizes how massive what is easily and fully substantiated is, it will open their mind to how easily it might be even more incredible than that. Because what we see is just the small portion which leaked out, as Cabal assiduously sought to cover their own footsteps.

As Q says, "Enjoy the show.