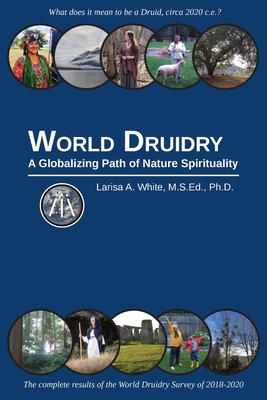 - What do modern-day Druids believe?

- What are their religious practices?

- How does Druidry vary with geography?

- How has Druidry evolved over time?

- What defines it as a religious tradition?

In the past, the answers to these questions have, of necessity, taken the form of educated guesses based on limited data, often biased by ease-of-contact, or Druidry group affiliation. The World Druidry Survey of 2018-2020 was the first, large-scale global effort to collect, interpret, and learn from the stories of all the practicing Druids of the world. The questionnaire included 189 items, organized into 42 sets of questions, including 18 open-ended essay questions. It probed into details of modern Druids' physical, social, and cultural environments; their ethnicities; their theological beliefs, ritual practices, and celebrated holidays; and the factors that influenced their development as Druids.

Completed surveys were returned by 725 Druids, in six languages, from 34 nations, representing 147 Druid groups from around the world, in addition to 131 unaffiliated, solitary practitioners. Their responses included thousands of pages of rich, narrative data, allowing for the use of robust, mixed-methods analytic tools to paint a vivid picture of the contemporary religious tradition that is World Druidry.

Here are their stories.