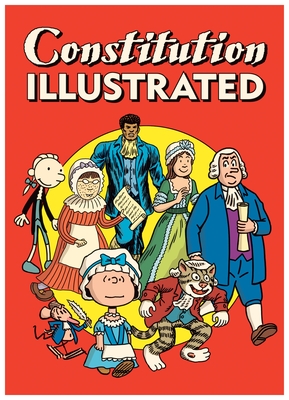 R. Sikoryak is the master of the pop culture pastiche. In Masterpiece Comics, he interpreted classic literature with defining twentieth-century comics. With Terms and Conditions, he made the unreadable contract that everyone signs, and no one reads, readable. He employs his magic yet again to investigate the very framework of the country with Constitution Illustrated. By visually interpreting the complete text of the supreme law of the land with more than a century of American pop culture icons, Sikoryak distills the very essence of the government legalese from the abstract to the tangible, the historical to the contemporary.

Among Sikoryak’s spot-on unions of government articles and amendments with famous comic-book characters: the Eighteenth Amendment that instituted prohibition is articulated with Homer Simpson running from Chief Wiggum; the Fourteenth Amendment that solidifies citizenship to all people born and naturalized in the United States is personified by Ms. Marvel; and, of course, the Nineteenth Amendment offering women the right to vote is a glorious depiction of Wonder Woman breaking free from her chains. American artists from George Herriman (Krazy Kat) and Charles Schulz (Peanuts) to Raina Telgemeier (Sisters) and Alison Bechdel (Dykes to Watch Out For) are homaged, with their characters reimagined in historical costumes and situations.

We the People has never been more apt.

R. Sikoryak is an animator, illustrator, and cartoonist living in New York with his wife. He is in the speakers program of the New York Council of the Humanities and teaches in the illustration department at Parsons School of Design.

"The most slyly patriotic book of the year." —The New York Times, Best Graphic Novels of 2020

"This pastiche of comics and politics is a cleverly educational and irresistible way to engage with this foundational text." —Publishers Weekly

"From Preamble to Amendment XXVII, this is a comic lover/political junkie’s dream... Without a shadow of a doubt, [Constitution Illustrated] is one of the most exciting comic works to come out in this, the year of our lord, 2020." —School Library Journal

"Constitution Illustrated is as much a history lesson about great American comics as it is about the country’s most cherished foundational document."
—Popzara

"The Constitution is a fixture of our lives, whether we think about it daily or not, and so too are some if not all of these artists. They are the We of We the People."
—Multiversity Comics

"The Constitution Illustrated is so easy to read... that even a man-child U.S. President might learn something about the laws, precepts and rights bequeathed to the nation he leads."
—Print Mag

"R. Sikoryak, able to perfectly mimic any other cartoonist, is the Will Elder of our time... I'm totally in awe of the many different styles and characters that are included in this handy, little tome."
—Boing Boing