Living by Numbers: In Defence of Quantity (Paperback) 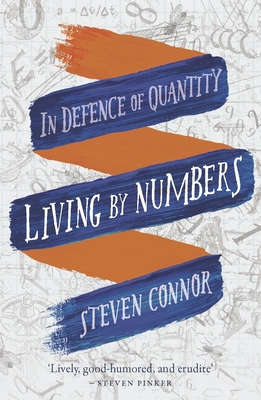 Living by Numbers: In Defence of Quantity (Paperback)


Email or call for price.
How do we really think about the world? We may use words to tell stories about it or draw pictures to represent it, but one thing we do far more than either of those is make calculations of the things that are in it—and to do that we use numbers. Numbers give shape and texture to almost everything we feel, say, dream, and do, a fact that Steven Connor explores in this qualitative assessment of the quantifiable. Looking at how numbers play a part in nearly every aspect of our lives, he offers a fascinating portrait of the world as a world of numbers.
Connor explores a host of thought-provoking aspects of our numerical existence. He looks at the unexpected oddities that shape the loneliest number—the number one. He looks at counting as a human phenomenon and the ways we negotiate crowds, swarms, and multitudes. He demonstrates the work of calculation as it lies at the heart of poetry, jokes, painting, and music. He shows how we use numbers to adjust to uncertainty and chance and how they help us visualize the world in diagrammatic ways, and he unveils how numbers even help us think about death. Altogether, Connor brings into relief an aspect of our lives so ubiquitous that we often can’t see it, unveiling a rich new way of thinking about our existence.

Steven Connor is Grace 2 Professor of English at the University of Cambridge and the author of many books, including Beyond Words: Sobs, Hums, Stutters and Other Vocalizations, also published by Reaktion Books.

“Full of delights and insights for mathematicians and nonmathematicians alike. . . . Living by Numbers turns the question of whether a problem might best be approached qualitatively or quantitatively on its head, suggesting that it misses the point. Instead of asking how the humanities and arts might respond to the expansion of statistics and data sciences, Connor asserts that the important questions about life—and the historical, philosophical, and artistic ways of addressing them—have always also been about numbers.”
— Science

“Connor shows how number is essential to literary criticism, music, visual art and even to pleasure . . . It is an indication of the richness of Connor’s content that frequently I wanted more . . . Readers of this book will be mentally engaged in a dialogue with the author throughout . . . Connor is always stimulating as well as witty.”
— Times Higher Education

"This is a fascinating book. It is not an exploration of the study of mathematics, nor an explanation of mathematical principles, as it is a commentary upon life and the critical place of numeracy within it."
— Methodist Recorder

"This is a book about our relationship with numbers rather than the numbers themselves, and the way they influence all spheres of human activity including art, music, poetry, and literature. . . . An interesting take."
— Tablet

“My favorite polymath now deconstructs anti-numerical animus within the humanities and the number magic of the statistical ideologues. Conner finds number everywhere: meter, rhythm, cycle, pattern, repetition, street numbers, PIN numbers, grids, graphs, tipping points, multitudes and the masses. His criticisms of critique notwithstanding, no humanist has thought more deeply about number in everyday life since before the rationalization of knowledge.”
— Regenia Gagnier, author of "The Insatiability of Human Wants: Economics and Aesthetics in Market Society"