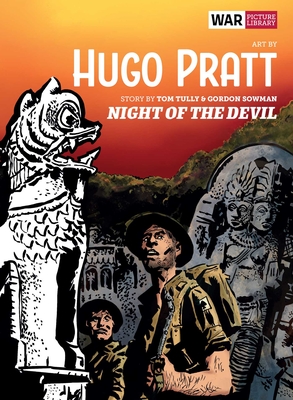 Night of the Devil by comics legend Hugo Pratt is the fourth in a major series of new collections - joining the War Picture Library’s mission to bring all of the long-lost UK of war comics master artists back into print.

In Night of the Devil, take a hallucinatory trip through the oppressive heat of the Burmese jungle along with British soldiers engaged in desperate skirmishes with the enemy. In Bayonet Jungle, Private Jack Green’s presence is seen as an omen of bad luck but he struggles to prove himself to the experienced soldiers of Third Platoon as they fight against the Japanese army that surrounds them.

Hugo Pratt’s influence on comic art can still be felt today, he was one of the 20th century’s greatest artists. In 1967 he created the internationally popular comic book character, Corto Maltese, but he had already been working in comics for 20 years before then. In 1959 he moved to London where he worked for Fleetway on their War Picture Library line of comics. He won countless awards for his work before he died in 1995.

Tom Tully is one the most prolific writers ever to grace British comics. His diverse portfolio of work was produced over four decades. Born in Glasgow, Tully entered the industry in the sixties when he began working for Fleetway. One of his earliest strips, Heros the Spartan, ran in the original Eagle and was illustrated by the great Frank Bellamy. He also wrote Mytek the Mighty (Valiant & Vulcan) and The Steel Claw (Valiant & Vulcan) in the same decade. The seventies saw Tully work on a variety of significant stories including Adam Eterno (Thunder), Johnny Red (Battle), Harlem He-roes (2000 AD), The Leopard from Lime Street (Buster) and Roy of the Rovers (Tiger), the strip he worked on longer than any other writer.

"There is no doubt that Battle Stations, and the titles following it, are sure to find their home among modern comic fans once again." -- The Beat
— The Beat