Industry and Ingenuity: The Partnership of William Ince and John Mayhew (Hardcover) 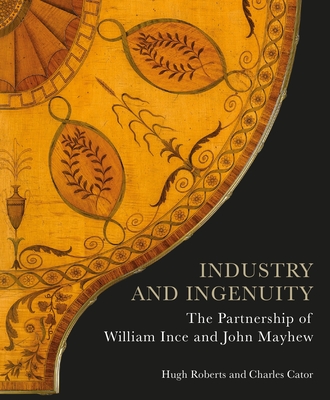 The partnership of William Ince (1737–1804) and John Mayhew (1736–1811) ran from 1758 to 1804, and was one of the most enduring and well-connected collaborations in Georgian London's tight-knit cabinetmaking community. The partners' clientele was probably larger, and their work was arguably more influential over a longer period, than most other leading metropolitan makers – perhaps even than that of their older contemporary, the celebrated Thomas Chippendale.

Despite their considerable output and an impressive tally of clients and commissions, much of Ince and Mayhew's work has remained unidentified until recent times. The authors' substantial research in private family archives, county record offices and bank archives has allowed them to uncover much new evidence about the business and its influence within cabinetmaking circles. In Industry and Ingenuity, the results of these new investigations are presented alongside an impressive selection of more than 500 colourful, vibrant photographs of Ince and Mayhew's works, many previously unpublished, which together emphasise the partnership's proper position in the pantheon of great eighteenth-century cabinetmakers.

Sir Hugh Roberts, Surveyor Emeritus of The Queen's Works of Art, was Director of The Royal Collection, the art collection of the British Royal Family, from 1996 until 2010, having joined the Royal Household in 1988. From 1970 to 1987 he worked at Christie's, where he was a main board director from 1976. He has written extensively on English and French furniture and decorative arts in Royal Collection exhibition catalogues and major journals, and is the author of For The King's Pleasure (2001) and The Queen's Diamonds (2012).

Charles Cator has worked at Christie's, the fine art auctioneers, since 1973 and is currently Deputy Chairman of Christie's International. During his career there he has held a number of senior positions, notably in the furniture and decorative arts fields, and has contributed articles to leading journals in these areas on furniture-makers and the history of collecting. He is also the co-author (with David Linley and Helen Chislett) of Star Pieces (2009).