Formula One: The Pursuit of Speed: A Photographic Celebration of F1's Greatest Moments (Hardcover) 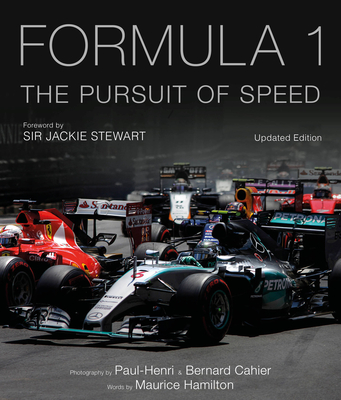 Formula One: The Pursuit of Speed: A Photographic Celebration of F1's Greatest Moments (Hardcover)

This is book number 1 in the Formula One series.

The adrenaline-fueled, high-octane world of Formula One has created some of the greatest moments in sporting history. From the intense rivalries between teams and drivers, such as Alain Prost and Arton Senns and 2015's Rosberg and Hamilton, to the infamous tracks that have created moments of tragedy and triumph -- F1's greatest moments read like a film script.

The Cahier Archive has captured the drama from the 1950's to the present day including Lewis Hamilton's 2015 winning season. It is fulled with stunning behind-the-scenes shots, from pit stops to personal moments, beautiful portraits of the drivers and atmospheric shots of the racing in action. Structured around three sections: Drivers and Rivalries, Teams and Cars, and Tragedy and Triumph of the Circuits, Formula 1: The Pursuit of Speed captures the intensity and beauty of the sport. Each sectionis introduced with vivid essays by F1 correspondent Maurice Hamilton, and filled with the Cahier's beautiful and resonating photographs, many unpublished giving a behind-the-scenes look at the world of F1.

Maurice Hamilton has been part of the Formula One scene since 1977 and was the Observer’s motor racing correspondent for 20 years. He has written more than 20 books as well as commentating on Formula One for BBC Radio. He is now actively involved with the online community on Twitter and writes several blogs whilst continuing to write books about racing.

The Cahier Archive is the only photographic collection covering the history of the Formula One Championship to have remained in the hands of its original authors. Two photographers have built this archive: Bernard Cahier and his son Paul-Henri, giving the collection two very different styles. Bernard was a reporter and had the gift to make people truly live events through his pictures. Paul-Henri, on the other hand, has always leaned towards an artistic approach to photography. The common ground of their photos though, is that they always go beyond the illustrative dimension.

Once described as the ‘Cartier-Bresson of Motor Racing’ due to his uncanny ability to capture key moments, Bernard Cahier was a renowned photo-journalist. Starting in 1952, he covered both F1 and sports car races for innumerable magazines around the world and sometimes even raced himself, notably at Sebring and in the Targa Florio. He founded the IRPA (International Racing Press Association) in 1968 and remained its president until his retirement in 1985.

"Covers the best of Formula 1 motor racing from the 1950s to the present" - Classic Car Weekly
"A combination of the Cahiers and Maurice Hamilton, this book has 272 pages worthy of any coffee table." - Motor Sport
"This beautifully written book will appeal to fans of classic and modern F1 alike." - Auto Express