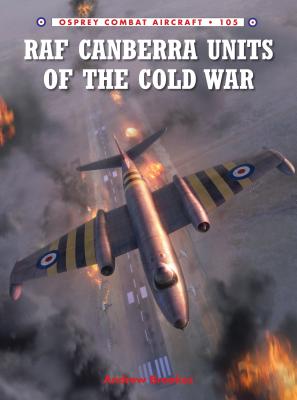 This is book number 105 in the Combat Aircraft series.

Throughout the Cold War, this 525mph bomber fulfilled the same role as the Mosquito fighter-bomber in World War II.

From its first public demonstration at the Farnborough Air Show of 1949, the English Electric Canberra bomber captured the attention of the aviation world. It could outmaneuver all the fighters of the time and it could climb way above their operating ceilings. Yet this bobmer was simple to maintain and a delight to fly, although it could punish any pilot who did not treat it with respect. The Canberra B 2 first flew on April 21, 1950 and entered frontline service with No 101 Sqn in May 1951. In a testament to the aircraft's benign handling characteristics, the transition program consisted of only 20 hours in the Gloster Meteor and three hours in the dual-control Canberra trainer. With a maximum speed of 470 knots (871 km/h), a standard service ceiling of 48,000 ft (14,600 m) and the ability to carry a 3.6-tonne (7,900-lb) payload, the Canberra was an instant success. Of the 42 RAF Canberra B 2 squadrons, 24 served in Bomber Command, four in Cyprus, one in the Far East and nine on special duties. The next bomber version was the B 6, of which ten squadrons served in Bomber Command, two in Cyprus and one in the Second Allied Tactical Air Force (2nd ATAF). Six B 15/B 16 squadrons served in Cyprus and the Far East, and five squadrons of B(I) 8s were assigned to the Supreme Allied Commander Europe's tactical nuclear force in 2nd ATAF. In addition, 19 squadrons of PR Canberras served in the photo-reconnaissance role. The Canberra PR 9, the last Canberra in RAF service, retired on June 23, 2006, 57 years after the first Canberra flight.

Andrew Brookes completed RAF pilot training after reading history at Leeds University. Following reconnaissance and strike tours on Victors, Canberras and Vulcans, during which he logged 3500 flying hours, he served as a UK nuclear release officer in NATO and was the last operational RAF Commander at the Greenham Common cruise missile base. He was coordinator of airpower studies at the RAF Advanced Staff College and Aerospace specialist at the International Institute for Strategic Studies from 1999-2009. He is now Director of the Air League in London. He publishes and broadcasts widely, and he received the Defense Aerospace Journalist of the Year Award in 2004 and 2006. He has written fifteen aviation books, including Vulcan Units of the Cold War, Victor Units of the Cold War and Valiant Units of the Cold War for Osprey's Combat Aircraft series. Andrew is a Liveryman of the Guild of Air Pilots and Air Navigators, a Fellow of the Royal Aeronautical Society and a Fellow of the Royal United Services Institute. The author lives in London, UK.

“This book will whet the interest of RAF fans in general, and in particular fans of the Canberra.” —Aeroscale

“Osprey does a great job of showing the development and changes from the early B.2 to the late PR.9.  The color schemes shown are representative of the times and places where the Canberra earned its reputation as a pretty darned good bomber. Recommended.” —Jim Pearsal, IPMS/USA

“Included in the book are the usual great pilot stories, excellent period photos, some in color, and a goodly number of full color profiles, covering the types nearly 55 years of operational use by the RAF. It is a great read and an equally good reference book. One that is a must for the Canberra fan.” —Scott van Aken, www.modelingmadness.com