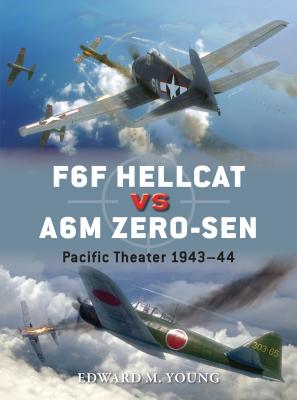 This is book number 62 in the Duel series.

In the key Pacific War battles of the Marianas Turkey Shoot, Leyte Gulf, and in and around Japan itself (from late 1943 through to VJ-Day) the principal fighters involved were the F6F Hellcat and the A6M5/7 Zero-sen. The former was Grumman's successor to the pugnacious Wildcat, and its creation was shaped by the combat experiences of Naval Aviators flying the F4F against the A6M2/3 Zero-sen from late 1941. Blooded in combat against the Japanese in August 1943, the Hellcat went on to serve as the principal US Navy fighter on board carrier decks until war's end. Despite its lethality in the air when ranged against the best Japanese fighters, the Hellcat still retained docile handling qualities around the carrier deck. Naval Aviators flying the Hellcat claimed in excess of 5,000 kills in the Pacific, and more than 300 pilots achieved ace status on the type. The majority of these victories took the form of A6M5 Zero-sens, the most-produced model of the final Mitsubishi fighter - some 6000 were built from late 1943 through to war's end. The A6M5 reached front-line units just as the Hellcat was making its combat debut, the new version of the Zero-sen being based on the previous A6M3 model but with modified flaps and ailerons and thickened wing skinning. It was only meant to be an interim design pending the arrival of the A7M Reppu and J2M Raiden. However, terminal development problems with the former and technical issues with the latter meant that the A6M5, and re-engined limited run A6M7 (150 built), had to hold the line through to September 1945. By now badly outclassed by the Hellcat, literally thousands of Zero-sens fell victim to US Navy fighter squadrons in the final years of the war.
Edward Young is a retired financial executive with degrees in Political Science from Harvard University and the University of Washington. During his career he held assignments in New York, London, Tokyo and Hong Kong. He has written a number of books and numerous articles on aviation and military history. He is the author of Osprey Campaign series 136: Meiktila: The Liberation of Burma, Warrior Series 141: Merrill's Marauders, Osprey Combat Aircraft series 87: B-24 Liberator Units of the CBI, Duel series 41: B-24 Liberator vs. Ki-43 'Oscar' and Osprey Aircraft of the Aces 109: American Aces Against the Kamikaze. He lives with his wife in Seattle, Washington. The author lives in Seattle, WA.