Sniping in France: With the British Army During the First World War (Paperback) 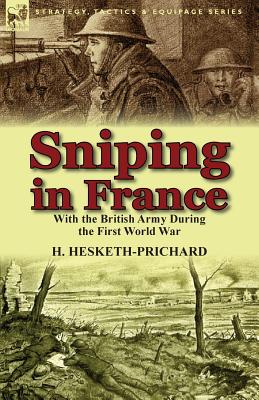 The crack-shots of the war in the trenches Military historians have always been interested in the activities of snipers. For the uninitiated, there is something romantic about the lone marksman, far away from the security of his lines and his comrades, who lies camouflaged and still until the opportunity arises to strike down one of the enemy. It is a lonely and perilous way to make war and requires an individual not only possessed of great weaponry skills, but one with the mental fortitude to execute his task. For the enemy, death, coming swiftly and unseen from an unknown quarter, is a terrifying and demoralising prospect. We know much of the snipers of modern times, armed with their high powered and technical equipment, but the 'bolt from the blue' is as old as warfare itself. Kipling told it well in his poetry when he wrote, 'two thousand pounds of education drops to a ten rupee jezail.' This book concerns the snipers of the British Army as they operated in France during the First World War. It is an excellent book written by an author with first hand experience. The reader is taken through activities at the first Army School of Scouting, Observation and Sniping and the principles of sniping as they applied to the trench warfare. The author describes the genesis of sniping as the British Army went to war and includes many first hand accounts and often amusing anecdotes of the activities, snipers and observers operating between the battle lines at the height of the conflict. Recommended for all those interested in the Great War.
Leonaur editions are newly typeset and are not facsimiles; each title is available in softcover and hardback with dustjacket.