The Fighting 14th: the 14th (Duchess of York's Own) Light Dragoons During the West Indies Campaign, The Peninsular War and The War of 181 (Paperback) 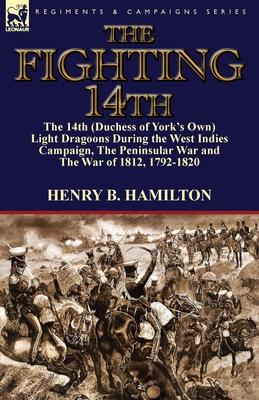 A famous cavalry regiment at war with Napoleon As its commanding officer and as a noted Oxford University academic Colonel Henry Hamilton was well placed to write the history of the 14th (King's) Hussars. His full regimental history covers from the origins of the regiment in 1715 to its service during the Boer War at the turn of the 19th and 20th centuries. While some military history students require a work of this depth, there are those who are primarily concerned with the periods when regiments were on active service. For the 14th (King's) Hussars in the 19th century, this was during the Napoleonic Wars, principally during the Peninsular War in Spain and in the South of France, and later in India where as H. M 14th (King's) Light Dragoons they served with distinction in the Second Sikh War and during the Indian Mutiny. By carefully editing Hamilton's book, and adding illustrations and maps and supplementary material not originally present, the Leonaur editors have created two linked volumes that focus on these periods of the regiment's history. The Fighting 14th follows the campaigns under Wellington and will be an essential addition to the library of every student of the war in the Iberian peninsula. It benefits from the inclusion of a number of significant passages from the memoirs of one of the regiments most renowned and daring officers, Captain Thomas Brotherton, whose entertaining and compellingly recounted adventures bring the history of this cavalry regiment vibrantly to life.
Leonaur editions are newly typeset and are not facsimiles; each title is available in softcover and hardback with dustjacket.