Marmont on Warfare: An Appraisal of the Military Art by One of Napoleon's Marshals with a Biography of the Author-On Modern Armies by Augu (Paperback) 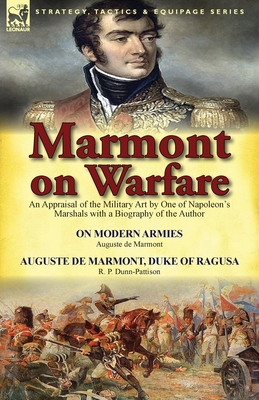 Warfare from the perspective of one of Napoleon's marshals Napoleon Bonaparte, for all his many personality flaws, is generally regarded as a genius of military craft. His innovative grand tactics frequently overwhelmed the generalship of commanders whose understanding of war was founded on ideas from the sixteenth and seventeenth centuries. None of his generals or marshals were of his calibre in this respect, yet all, by degrees, practiced the art of war in the manner of their master. Those interested, rightly look to the writings of Antoine Jomini-a soldier of Napoleon and considered by many to one of the founding fathers of modern strategy-as a primary source on methods of warfare in the early 19th century. In his book 'The Art of War' Jomini discusses his subject using examples drawn from both the battles and campaigns of Napoleon and from his own experiences in the emperor's service. As with Jomini, the principal interest and value of Marmont's book, to the modern reader, is that the author writes from the perspective of a soldier of the First Empire of the French and draws upon knowledge, experience and examples (often first-hand) from the campaigns of the Napoleonic era, to expand and explain his topic. This makes 'Marmont on Warfare' an invaluable resource for all those interested in the period. The author briefly touches upon military theory before turning to the organisation of armies of the Napoleonic model. There follows a comprehensive examination of the operational aspects of war including battle conduct, retreats, night attacks, ambuscades and siege craft (among others) and finally an examination of command philosophy. This unique Leonaur edition is enhanced by the inclusion of a short biographical piece, concerning the military career of Marmont, that provides context for the author's own writings.
Leonaur editions are newly typeset and are not facsimiles; each title is available in softcover and hardback with dustjacket.