John Buchan's 1914: the World at War-The Naval Conflict & Global Campaigns of the Opening Year of the First World War (Hardcover) 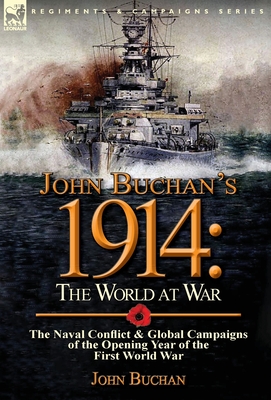 Over the seas and far away-the world at war In the late summer of 1914, the eyes of the world were fixed upon Europe as seemingly unstoppable German armies simultaneously marched eastwards and westwards subduing nations and forcing their armies to retreat. This was the beginning of an industrial war without precedent which would send shockwaves across the globe. This book, specially compiled by Leonaur's editors from John Buchan's excellent writings on the First World War, concentrates on the world beyond mainland Europe in the early months of the war. Readers will discover the naval battles of Heligoland Bight, Coronel, the Falkland Islands and Dogger Bank as the Imperial German Navy tested its mettle against the might of the Royal Navy. Here are accounts of German naval raiders such as the 'Emden' and the naval bombardments of British seaside towns. German and British colonial and regular troops clashed in East and West Africa and actions were fought on the coast of China and upon remote Pacific Islands. Disaffected Boers rose in rebellion in South Africa and Germany's ally, the Ottoman Turkish Empire joined the fray making advances in Mesopotamia (modern Iraq) and towards the strategically vital Suez Canal in Egypt. In 1914 this was a conflict far removed from the familiar mud, wire and trenches that have become emblematic of the First World War. This is a highly recommended overview of the world at war created especially to mark the centenary of the outbreak of hostilities; it includes many illustrations, photographs and maps.
Leonaur editions are newly typeset and are not facsimiles; each title is available in softcover and hardback with dustjacket.