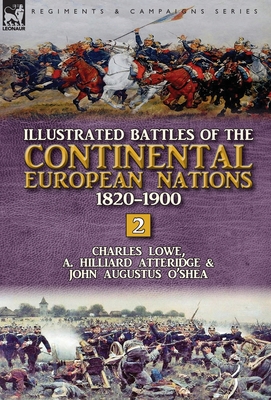 Volume two of the conflicts of the continental European nations

The conflicts of the nineteenth century did much to create the modern world. Following the defeat of the First Empire of the French, most of Europe was in perpetual turmoil and became the stage for many small wars. The turn of the twentieth century brought even greater catastrophes, since the century that had just passed had sown the seeds of global warfare. From 1820 the people of continental Europe--from the Atlantic coasts to the Middle East--were embroiled in struggles which were both national conflicts and rebellions. This was a time when the nations we know today came into being within regions which had previously been held in thrall for generations by declining empires. Additionally, the age of colonialism saw continental European armies fighting across world. This unique Leonaur three volume set focuses, in chronological order, on the battles which were fought during this turbulent era. Beginning after the fall of Napoleon, and excluding, in the main, the conflicts of the British Empire, these narratives cover the most notable and interesting actions which involved continental European armies. Turkish and North African conflicts are also included. Each book is profusely illustrated with maps and black and white illustrations and the set is wonderful resource of information on largely forgotten wars that is suitable for all students of military history. This second of this three volume set includes fourteen accounts including Aspromonte, Custosa, Duppel, Mars la Tour, Gravelotte and others.

Leonaur editions are newly typeset and are not facsimiles; each title is available in softcover and hardback with dustjacket.